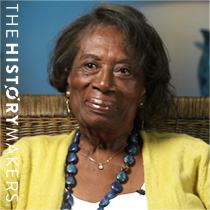 See how Dolores Allen Littles is related to other HistoryMakers

Photography editor Dolores Allen Littles was born on May 21, 1932 in Long Island, New York. After graduating from Hempstead High School in 1950, Littles enrolled at Pace College, where she completed secretarial coursework. Littles later transferred to the City College of New York, where she earned her B.A. degree in 1959.

Littles joined LIFE magazine as a part-time employee, working at the clip desk for several months before her promotion to full-time work where she worked closely with the editorial and copywriting departments. She also assisted staff photographer Gordon Parks with his exhibit at Eastman Kodak by creating titles for the photographs used in the show. Littles worked as a copy assistant with the editors of LIFE on the book The Life Treasury of American Folklore, published in 1961 by Time, Incorporated. That same year, she served as a staff writer for LIFE magazine’s, Life World Library series Brazil by Elizabeth Bishop and Italy by Herbert Kubly. In 1968, Littles received credit as a member of the photography editorial staff for Time-Life Books’ Foods of the World series. In 1979, Littles was credited as the assistant director of photography of the Time Life book, ‘The Spanish Main’, edited by Jerry Korn. In 1982, Littles served as the director of photography for Time-Life Books cookbooks Shellfish and Hors d’oeuvres as well as books of photography such as The Great Themes, The Print and The Jet Age. During her tenure at Time Life Books, Littles served as the assistant chief and eventual chief of the picture department. In 1995, Littles curated the works of two contemporary photographers, Seldon Dix, Jr. and Adger W. Cowans, for the Hofstra University Museum in Long Island, New York. After twenty-eight years with Time Life Books, Littles retired as the director of photography.

Dolores Allen Littles was interviewed by The HistoryMakers on August 23, 2018.

See how Dolores Allen Littles is related to other HistoryMakers