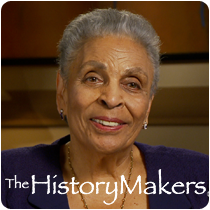 See how Dolly Adams is related to other HistoryMakers
Donate Now

As an educator, Adams has held a variety of positions, including elementary school teacher and administrator; college dean and Professor at the University of Michigan, Wilberforce University, Albany State College, Paul Quinn College, and Howard University School of Law. Adams last served as an adjunct professor at the Interdenominational Theological Center (ITC) in Atlanta, Georgia. She has also held outstanding leadership positions in community service organizations. Her role as Episcopal Supervisor of the Women’s Missionary Society (WMS) and the Ministers’ Wives of the Tenth (Texas), Second (Mid-Atlantic States), Sixth (Georgia) and Seventh (South Carolina) and Eleventh (Florida and Bahamas) Episcopal Districts covered a span of 32 years. Adams served for four years as National President of The Links, Inc., and The Links Foundation, Inc., and five years as National President of the Black Women’s Agenda, Inc. In addition, Adams served on the board of directors of the United Negro College Fund, Paul Quinn College Foundation, the Southern University Foundation and the sisters of Charity Foundation. Adams now serves on the Board of Directors of the Black Women’s Agenda, Inc., the WMS Foundation and the Links, Inc.

From 1982-86, Adams was cited as one of the “100 Most Influential Black Americans” by Ebony Magazine, and Dollars & Sense Magazine named her as one of the “Top 100 Black Business and Professional Women” 1986 and 1987. Adams is a member of Alpha Kappa Alpha Sorority and the N.A.A.C.P. In recognition of her services in South Carolina, the Governor presented to her the Order of the Palmetto, the highest citation given by the State to a citizen.

Dolly Desselle Adams was interviewed by The HistoryMakers on December 13, 2012.

See how Dolly Adams is related to other HistoryMakers
Donate Now
Click Here To Explore The Archive Today!