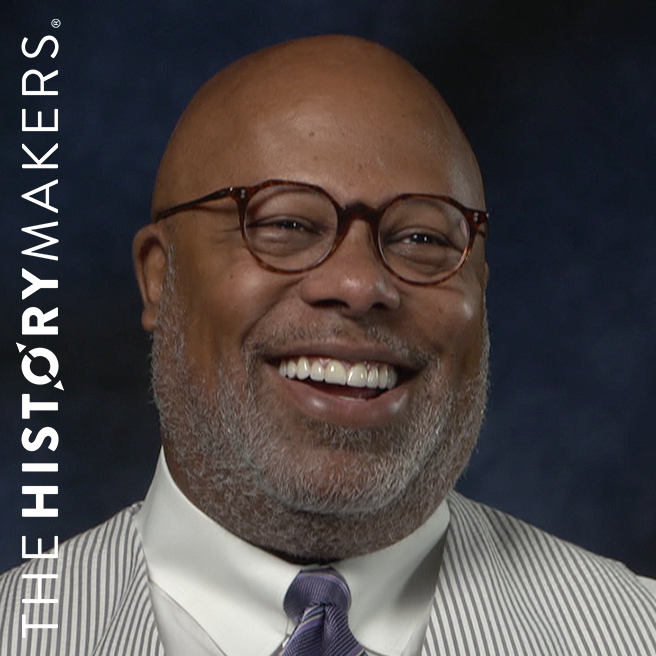 Favorite Color:
Black
Favorite Food:
Pizza
Favorite Time of Year:
Spring
Favorite Vacation Spot:
Martha's Vineyard
Favorite Quote:
Sometimes you have to to take the leap of faith to catch yourself going down.

Favorite Color:
Black
Favorite Food:
Pizza
Favorite Time of Year:
Spring
Favorite Vacation Spot:
Martha's Vineyard
Favorite Quote:
Sometimes you have to to take the leap of faith to catch yourself going down.

See how Dmitri Stockton is related to other HistoryMakers

Chief executive officer Dmitri L. Stockton was born on March 30, 1964 in Martinsville, Virginia to Peggy Reynolds and Roosevelt Stockton, Jr. He earned his B.S. degree in accounting from North Carolina Agricultural and Technical State University in 1986.

Upon graduation, Stockton began his career at Arthur Andersen in Atlanta, Georgia and subsequently joined GE Company in 1987, serving on its financial management program. After graduating from the program in 1989, he joined the corporate audit staff until he moved to GE Capital Commercial Real Estate in 1991. He remained in the real estate division for six years, ultimately rising to the level of managing director. In 1997, Stockton assumed the position of chief risk officer for GE Capital Mortgage Corporation. After two years in this role, he was promoted to chief marketing officer for GE’s $100 billion mortgage insurance operation, assuming responsibility globally for marketing, business development, government and public relations. In 2001, he moved to Switzerland to become chief executive officer for GE Capital Bank; and, in 2004, Stockton was promoted to lead GE Consumer Finance’s expansion in banking across Eastern Europe, as president and CEO. During the assignment, Stockton orchestrated the platform’s expansion into Turkey, Romania and Russia. He was then appointed a vice president of GE Company in 2005 by GE’s Board of Directors. In 2011, after a decade abroad, Stockton returned to the United States to lead the restructuring and sale of GE’s $120 billion asset management department as chairman, president and CEO. He led this business until it was sold to State Street Corporation in 2016. Stockton remained at GE as a special advisor to the chairman of GE until his retirement in 2017. That year, Stockton formed Global Investor Catalyst, LLC, serving an advisor and investor.

Stockton held positions on several corporate boards including Deere & Company, American Family Insurance, Ryder System, Inc., Target Corporation, and Stanley Black and Decker, Inc. He also served on the boards of the Thurgood Marshall College Fund, A Better Chance, and the Executive Advisory Council of the College of Business and Economics at North Carolina Agricultural and Technical State University, and been recognized by the National Association of Black Accountants and the National Association of Securities Professionals.

See how Dmitri Stockton is related to other HistoryMakers