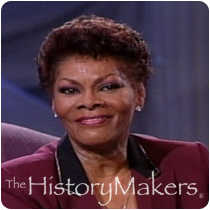 Dionne Warwick was born in East Orange, New Jersey, on December 12, 1940. The oldest of three siblings, Warwick was raised in a deeply religious and musical family. Her father Mantrel, promoted gospel records while her mother, Lee, managed the Drinkard Singers, a gospel group comprised of Warwick's aunts and uncles.

At the age of fourteen, Warwick, along with her sister and cousin, formed The Gospelaires. The gospel trio sang in local churches, college campuses and African American theaters. They received widespread recognition by winning an amateur contest at the famed Apollo Theater. Over the next few years, The Gospelairs sang behind many of the most prominent artists of the time, including Dinah Washington, Chuck Jackson and Solomon Burke.

In 1959, Warwick received a music scholarship to the University of Hartford in Connecticut. During a session with The Drifters, music conductor and composer Burt Bacharach heard her unique voice. Warwick signed a recording contract in 1962 and her first single, "Don't Make Me Over," was a hit, attracting both R&B and pop audiences. From 1963 to 1966, Warwick achieved unprecedented success by becoming the first crossover artist to have a dozen consecutive Top 100 hits.

In 1968, Warwick became the first African American solo female artist to receive a Grammy for "Do You Know the Way to San Jose." By 1970, she had recorded thirty hit singles, close to twenty best-selling albums and received a second Grammy for the album I'll Never Fall In Love Again.

Warwick brought her dynamic singing talents and commanding personality to television outlets, as well. She hosted the successful music programs Solid Gold, the Soul Train Music Awards and starred in her own show, Dionne And Friends.

Warwick has used her fame and influence to support causes close to her heart. A tireless activist, Warwick has served as the U.S. ambassador of health, a post that she held through both the Ronald Reagan and George Bush administrations. As one of the first artists to heighten public awareness of the AIDS epidemic, Warwick's concerted efforts raised millions of dollars.

Warwick maintains a busy schedule. She completed an international tour with Bacharach, performed with The National Opera Company of Japan, and recorded the critically acclaimed album Aquarela Do Brazil (Watercolors Of Brazil). Additionally, she runs her own television production and interior design companies. Her sons, David and Damon Elliot, are pursuing careers in the music industry as well, as the writers and producers of numerous hit songs.