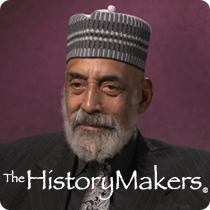 See how Dinizulu Gene Tinnie is related to other HistoryMakers

Professor and artist Dinizulu Gene Tinnie was born Gene Sinclair Tinnie on February 25, 1942, in the South Bronx, New York. Tinnie attended Suffolk County Community College, earning his A.A. degree, with Science Emphasis, in 1962. He continued his studies at the State University of New York-Stony Brook, with a B.A. degree in French in 1965, minoring in education and Spanish. In 1966, Tinnie earned a Fulbright scholarship to study French language, history and culture at the Université de Caen, France, receiving a Diplôme supérieur d'études françaises in 1967, and, in 1968, his Licence ès Lettres degree from the Université de Nancy. He would go on to earn his M.A. degree in French literature and linguistics from Queens College, City University of New York, in 1970.

Following his graduation, Tinnie worked as a linguist for the Black Dialect Project at the Southwest Regional Laboratory for Educational Research and Development in Los Angeles, California, while also continuing graduate studies in linguistics at UCLA.

Relocating to Boston, Massachusetts, he served as a project coordinator and artist-in- residence at Circle Associates educational consulting firm, and would be featured in his first exhibition, entitled “Black Artists,” in 1974 at Horticultural Hall, the same year he designed the inaugural museum space and exhibition of the new Boston African American Museum.

Subsequently moving to Miami, Florida, he joined the Miami Black Arts Workshop as an artist, designer, and project coordinator, serving in that position until 1983, and would become a founding member of the Kuumba Artists Collective of South Florida. Tinnie was an adjunct professor of English, humanities, and art appreciation at Miami-Dade Community College from 1975 to 1995, and joined Florida Memorial College in 1982, going on to serve in several positions that included art department chair. He also designed exhibitions for the Old Dillard Museum in Fort Lauderdale, and supplemental “After the Henrietta Marie” historical exhibitions in conjunction with the touring “A Slave Ship Speaks: The Wreck of the Henrietta Marie” exhibition, created by the Mel Fisher Maritime Heritage Society in 1995.

Tinnie’s public art commissions in South Florida include “Remembrance of the Way,” “Trilogy for Dr. King,” “The World is a Garden in which All Are One,” “A Gathering of Spirits,” the Richmond Heights Pioneers Monument, and the artwork on the Key West African Cemetery memorial monument. Major exhibitions include “I Remember the March on Washington,” (DC and Houston) and “Dinizulu Gene Tinnie: an Overview” (Miami).

Tinnie is the founder and co-director of the Dos Amigos/Fair Rosamond Slave Ship Replica Project. Publications discussing Tinnie’s research on the history of the Middle Passage have appeared in publications such as the Journal of African American History, Florida History, FlaVour magazine, and Islas bilingual quarterly.

In addition, he is chair of the City of Miami Virginia Key Beach Park Trust, and serves on several other boards related to historic preservation.

Dinizulu Gene Tinnie was interviewed by The HistoryMakers on January 23, 2017.

See how Dinizulu Gene Tinnie is related to other HistoryMakers
Click Here To Explore The Archive Today!