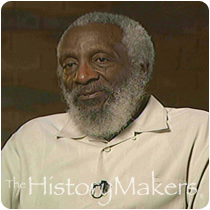 See how Dick Gregory is related to other HistoryMakers
Donate Now

Gregory’s college education was put on hold when he was drafted into the United States Army. It was in the army that Gregory first performed as a stand up comedian, entering and winning several U.S. Army talent shows. After his military service ended, Gregory worked at the United States Post Office by day, and by night performed as a comedian in several small black nightclubs.

In 1961, Gregory was hired by adult magazine mogul Hugh Hefner to work at the Chicago Playboy Club. Hefner was impressed by Gregory’s ability to perform successfully for a white audience. Soon after, Gregory received national acclaim, and in 1964 released an autobiography entitled Nigger, which sold seven million copies.

In the mid-1960s, Gregory became increasingly involved in the Civil Rights Movement and spoke out against the war in Vietnam and government policy. In 1967, he decided to run against Mayor Richard Daley in Chicago. Though unsuccessful, Gregory pursued higher political positions and ran for President of the United States in 1968 as a write-in candidate for the Freedom and Peace Party. Gregory was eventually defeated, but efforts landed him on the list of President Nixon’s political opponents; his experiences in the political arena inspired Gregory to write a book entitled, Write Me In.

Throughout the 1980s, Gregory was principally known for his strong voice in the health food industry. Seen as a nutrition guru, Gregory advocated diets consisting of raw fruits and vegetables. Gregory developed a beverage called the Bahamian Diet Nutrition Drink, and advertised the product on television. In 2005, during the last stages of the Michael Jackson trial, Gregory was invited by Jackson’s father to advise him on his health.

In 2004 Gregory was listed as number eighty-one on Comedy Central’s list of the 100 Greatest Stand-Up Comedians of All Time; has also his own star on the St. Louis Walk of Fame.

See how Dick Gregory is related to other HistoryMakers
Donate Now
Click Here To Explore The Archive Today!