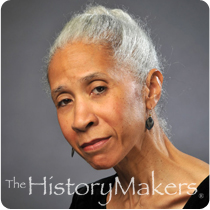 See how Dianne McIntyre is related to other HistoryMakers
Donate Now

Choreographer, dancer, and director Dianne McIntyre was born in 1946 in Cleveland, Ohio to Dorothy Layne McIntyre and Francis Benjamin McIntyre. She attended Cleveland Public Schools and graduated from John Adams High School in 1964. As a child, she studied ballet with Elaine Gibbs and modern dance with Virginia Dryansky and earned a BFA degree in dance from The Ohio State University.

Following her move to New York City in 1970, McIntyre founded her own company, Sounds in Motion, in 1972. McIntyre and her company toured and performed in concert with Olu Dara, Lester Bowie, Cecil Taylor, Max Roach, Butch Morris, David Murray, Hamiet Bluiett, Ahmed Abdullah, Don Pullen, Anthony Davis, Abbey Lincoln, Sweet Honey in the rock, Hannibal, Oliver Lake, and countless others musicians until 1988, when she closed it to have more time to explore new areas of creative expression. From her studio, McIntyre mentored many dance artists and continues to do so.

McIntyre’s special interest in history and culture as it relates to dance has led to many projects for her in the areas of concert dance, theatre, film and television, including (in dance) Union (after her research in Haiti) and Their Eyes Were Watching God (from Zora Neale Hurston’s novel). Other signature concert dance and dance theatre works are Take Off from a Forced Landing (her mother’s aviator stories), Mississippi Talks, Ohio Walks, I Could Stop on a Dime and Get Ten Cents Change (her father’s stories of Cleveland), and Open the Door, Virginia! (school civil rights events). In addition to completing works for her own companies, she has choreographed for Alvin Ailey American Dance Theater, Ailey II, Cleo Parker Robinson Dance Ensemble, Dayton Contemporary Dance Company, Dallas Black Dance, as well as college dance groups.

McIntyre’s work in theatre has been for Broadway, Off-Broadway, regional productions and London, England. Her theatre choreography credits of more than thirty plays include Mule Bone, Joe Turner’s Come and Gone, Spell #7, Crowns and Scott Joplin’s opera, Treemonisha. For film, McIntyre’s work appears in Beloved and for television, For Colored Girls Who Have Considered Suicide When the Rainbow is Enuf, Langston Hughes: The Dream Keeper and Miss Evers’ Boys, for which she received an Emmy nomination.

Grant support for McIntyre’s work includes awards from the National Endowment for the Arts, the Pew Charitable Trust and the New York State Council on the Arts. She has served on the board of directors of the Stage Directors and Choreographers’ Society. McIntyre is also a member of the Dramatists Guild and ASCAP.

See how Dianne McIntyre is related to other HistoryMakers
Donate Now
Click Here To Explore The Archive Today!