Information about Diane B. Patrick 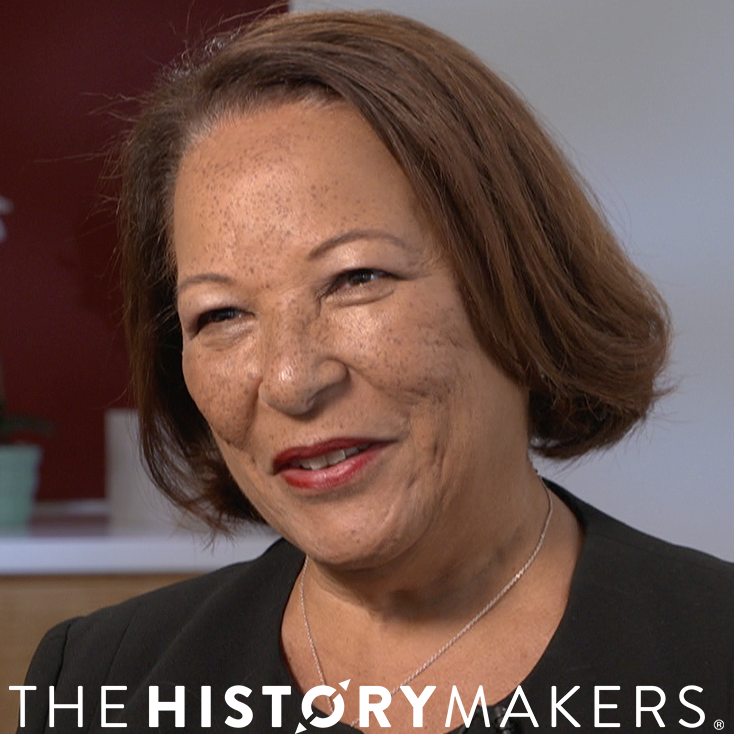 Favorite Color:
Blue
Favorite Food:
Tomatoes, Hamburgers, and Tuna Fish
Favorite Time of Year:
Thanksgiving
Favorite Vacation Spot:
Nevis
Favorite Quote:
The Will Of God Will Not Take You Where The Grace Of God Will Not Protect You

Favorite Color:
Blue
Favorite Food:
Tomatoes, Hamburgers, and Tuna Fish
Favorite Time of Year:
Thanksgiving
Favorite Vacation Spot:
Nevis
Favorite Quote:
The Will Of God Will Not Take You Where The Grace Of God Will Not Protect You

See how Diane B. Patrick is related to other HistoryMakers

Lawyer Diane Patrick was born on December 17, 1951 in Brooklyn, New York to John Charles Bemus and Lilian Bemus. At a young age, Patrick and her family moved to the Hollis neighborhood in Queens. In 1972, she received her B.A. degree in education from Queens College of the City University of New York. Patrick went on to receive her J.D. degree from Loyola Law School in Los Angeles, California in 1980.

Between college and law school, Patrick worked as an elementary school teacher in the New York public school system. After graduating from Loyola Law School, Patrick joined O’Melveny & Myers as an attorney. In 1983, as a third-year associate, Patrick was asked to move to New York City along with three other associates and two partners to open the firm's New York office. Three years later, Patrick and her family moved to Boston, Massachusetts, where she served as university attorney for Harvard University before being promoted in 1992 to director and associate vice president of human resources. Patrick worked as an attorney at Hogan & Harston in Washington, D.C. for one year before returning to Boston in 1995 to join Ropes & Gray as a labor attorney. From 2006 to 2015, she served as First Lady of Massachusetts during her husband Deval Patrick’s two terms as Governor. In 2010, Patrick was appointed chair of the diversity committee at Ropes & Gray; and, in 2013, she was promoted to co-managing partner at the firm. Patrick retired from Ropes & Gray in 2016.

Patrick served on the boards of the Epiphany School, the Posse Foundation, Massachusetts General Hospital, Partners Healthcare, United Way of Massachusetts Bay, and Jane Doe, Inc. She has volunteered with the Commonwealth’s Foster Care Review Unit, the Boston Bar Association’s Lawyer for a Day program, and the Boston Women Build in the Bayou project. Patrick served as a trustee for ArtsBoston, Brigham & Women’s Hospital, Cambridge College, and the Massachusetts Maritime Academy.

While in law school, Patrick received the American Jurisprudence Award, Best Appellant Brief in Statewide Moot Court Competition, and Outstanding Graduate Award for outstanding academic performance and citizenship. In 2015, she was inducted into the Academy of Distinguished Bostonians and received the Cushing-Gavin Management Attorney Award for Excellence from the Labor Guild. She received the Champion of Justice Award from Discovering Justice in 2017, and the Boston Bar Foundation’s Public Service Award in 2019.
Patrick and her husband, Deval Patrick, have two children: Sarah and Katherine.

Diane Patrick was interviewed by The HistoryMakers on September 12, 2019.

See how Diane B. Patrick is related to other HistoryMakers