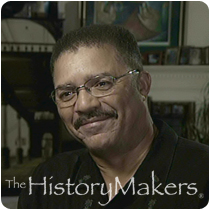 See how DeWayne Wickham is related to other HistoryMakers

Columnist DeWayne Wickham was born July 22, 1946, in Baltimore, Maryland. His mother, DeSylvia Virginia Chase, was related to a Buffalo Soldier and his father, John Trevillion Wickham, was a member of the Wickham House Museum's Wickham family, of Richmond, Virginia. Tragedy orphaned Wickham, who was raised by his Aunt Annette in Baltimore. He attended Cherry Hill Elementary School and Junior High School and four high schools, before joining the United States Air Force in 1964. Attaining the rank of sergeant, Wickham was awarded the Vietnam Service Medal. He attended Community College of Baltimore from 1970 to 1972. He earned his B.S.J. degree and a certificate in African American studies from the University of Maryland in 1974 and his M.P.A. from the University of Baltimore, in 1982.

From 1972 to 1973, Wickham served at the Baltimore Evening Sun as an intern, and became a copy editing intern for the Richmond Times Dispatch in 1974. He was Capitol Hill correspondent for U.S. News and World Report from 1974 to 1975, a reporter with the Baltimore Sun from 1975 to 1978 and was a talk show host for Baltimore’s WBAL-TV from 1976 to 1989. From 1978 to 1980, Wickham took a sabbatical from journalism and worked for Dr. Mary Frances Berry in President Jimmy Carter’s administration. He was a columnist for Gannett News Service in 1985 and started writing his column for USA Today in 1988. Wickham was part of the press corps that accompanied Nelson Mandela on his 1992 U.S. tour and was one of twelve journalists who accompanied Jean Bertrand Aristide back to Haiti in 1994. He also has served as a contributing editor to Black Enterprise magazine. In 2000, Wickham, created the Institute for Advanced Journalism Studies, which is based at North Carolina A&T State University.

A founding member of the National Association of Black Journalists (NABJ), Wickham served as president from 1987 to 1989. In 1995, Wickham led the first delegation of black columnists to the White House for a meeting with a United States President, Bill Clinton and led them back for another lengthy session in 1997. Wickham is a founder of the Trotter Group, an organization of black columnists, named for the Boston Guardian’s William Monroe Trotter. Wickham is the recipient of the Award of Special Merit from the Leadership Conference on Civil Rights. He is the author of Fire At Will (1989); Woodholme: A Black Man’s Story of Growing Up Alone (1995); and Bill Clinton and Black America (2002); and is the editor of Thinking Black: Some of the Nation’s Best Black Columnists Speak Their Mind (1996).

A lifelong member of the NAACP, Wickham has two daughters with his first wife, Ruth Ann Frederick, and one by his second wife, Wanda Nadine Persons, with whom his lives in suburban Baltimore and Orlando.

See how DeWayne Wickham is related to other HistoryMakers
Click Here To Explore The Archive Today!