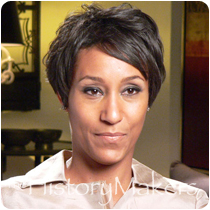 See how Desiree Rogers is related to other HistoryMakers
Donate Now

Business executive and entrepreneur Desiree Glapion Rogers was born on June 16, 1959 in New Orleans, Louisiana to Roy Glapion, a politically active schoolteacher and his wife, Joyce Glapion. After graduating from New Orleans’ Sacred Heart High School in 1977, Rogers began her college work at Wellesley College and earned her B.A. degree in political science in 1981. In 1985, Rogers earned her M.B.A. degree from Harvard Business School. Additionally, Rogers’ father was very active in the city’s Zulu Organization and served as its president from 1976 to 1988. Following in her father’s footsteps, Rogers served as Queen of the Zulu organization in 1988 and in 2000.

After graduate school, Rogers moved to Chicago, Illinois, began her business career at AT&T, and married John Rogers, Jr. Soon thereafter, she became a retail investment executive for entrepreneur Larry Levy. In 1990, Rogers was appointed by Governor Jim Edgar to run the Illinois State Lottery. In 1997, she became vice president of corporate communications for Peoples Energy. Rogers was promoted to Chief Marketing Officer in 2000 and in 2004, she was elected president of the company’s two utility subsidies, Peoples Gas and North Shore Gas. In this role, she also served as a senior vice president of the Integrys Energy Group before becoming the first African American social secretary for the United States White House. On August 10, 2010, Rogers was appointed CEO of Johnson Publishing Company, overseeing publication of Ebony and Jet magazines.

Rogers has served on a number of corporate and civic boards, including Equity Residential, Blue Cross Blue Shield of Illinois, the Museum of Science and Industry and Northwestern Hospital. She has been included in Crain’s “Top 25 Women to Watch” and “40 Under 40 Business Leaders.” Black Enterprise magazine has included her in the “Top 50 Most Powerful African American Business Women” and the “Top 75 Most Powerful Blacks in Corporate America.”

Desiree Rogers resides in Chicago with her daughter, Victoria.

Desiree Rogers was interviewed by The HistoryMakers on April 27, 2007.

See how Desiree Rogers is related to other HistoryMakers
Donate Now
Click Here To Explore The Archive Today!