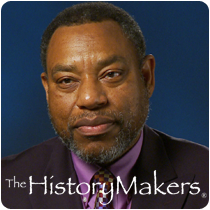 See how Derrick Pitts is related to other HistoryMakers

Astronomer Derrick Pitts was born on January 22, 1955 in the Tioga-Nicetown section of Philadelphia, Pennsylvania. As a child, Pitts was fascinated by outer space and rockets. After graduating from Germantown Academy, he received his B.S. degree in geology from St. Lawrence University in 1978.

Pitts began working at The Franklin Institute as a young college student. He was hired as The Franklin Institute’s chief astronomer and planetarium director after completing his degree. In these roles, he developed and oversaw all of the Institute’s astronomy and space-related programs and exhibits, frequently hosted the live “Sky Tonight” planetarium show and interviewed John Glenn and Carl Sagan. Pitts also served as the original director of Tuttleman OMNIMAX Theater and as museum vice president. In 2002, he oversaw the renovation of The Franklin Institute’s Fels Planetarium and played an integral role in the design of the new astronomy exhibit, ‘Space Command.’ Pitts became the host of “SkyTalk” on WHYY Radio in 2008. One year later, he served as the United States spokesperson for the International Year of Astronomy. In 2011, Pitts was named a National Aeronautics and Space Administration (NASA) Solar System Ambassador. He has appeared on many national television shows as a science expert including the Comedy Channel’s “Colbert Report” and “The Late, Late Show with Craig Ferguson.” Pitts served as a regular contributor on Current TV’s Countdown with Keith Olberman as well as programs on CNN International and MSNBC.

Pitts has held numerous positions in academic and community organizations including serving as president of the Greater Philadelphia Chapter of Tuskegee Airmen, Inc. and on the Board of Trustees for his alma mater St. Lawrence University and Widener University. He is the recipient of numerous awards including the Mayor’s Liberty Bell, the St. Lawrence University Distinguished Alumni Award, the G. W. Carver Medal and Please Touch Museum’s “Great Friend To Kids” Award. Pitts was inducted into the Germantown Historical Society Hall of Fame and selected as one of the “50 Most Important Blacks in Research Science” by Science Spectrum Magazine in 2004. He received the 2010 David Rittenhouse Award and an honorary Doctor of Science degree from LaSalle University in 2011. Pitts lives with his wife Linda in the Wynnefield Heights section of Philadelphia, Pennsylvania.

Derrick Pitts was interviewed by The HistoryMakers on May 23, 2012.

See how Derrick Pitts is related to other HistoryMakers
Click Here To Explore The Archive Today!