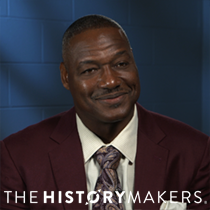 "Put God First In All You Do And Treat Others The Way You Want Them To Treat You."

Football player Derrick Brooks was born on April 18, 1973 in Pensacola, Florida to Geraldine Brooks and John Brooks. Raised by his mother and stepfather, Arthur Mitchel, Brooks graduated from Pensacola’s Booker T. Washington High School in 1990, and enrolled at Florida State University (FSU) in Tallahassee. At FSU, he was a member of the 1993 Seminoles National Championship team. He was also a four-year letterman, a consensus first-team All-American his junior and senior years, a three-time first-team All-Atlantic Coast Conference selection from 1992 to 1994, and named two-time Consensus first-team All-American in 1993 and 1994, and Atlantic Coast Conference Defensive Player of the Year in 1993. Brooks received his B.S. degree in business communications from FSU in 1995, and his M.S. degree in business communications from Florida State University in 1999.

Brooks was selected by the Tampa Bay Buccaneers in the first round of the 1995 NFL Draft. During his fourteen year career with the Buccaneers, Brooks was an eleven-time Pro Bowl selection and nine-time All Pro. He was named NFL Defensive Player of the Year after the Buccaneers’ Super Bowl victory in 2002.  He recorded 2,198 tackles, the most in franchise history, along with eight defensive touchdowns, second highest in Buccaneers history. In 2009, Brooks was released from the Buccaneers, and was declared a free agent for the 2009 season. During that time, Brooks joined ESPN2’s First Take as an NFL analyst and signed with Sirius NFL Radio in 2009. In 2010, Brooks announced his retirement from the NFL and was elected to the 2000s All Decade Defensive Team. In 2011, he became the co-owner and president of the Tampa Bay Storm team of the Arena Football League. Brooks was inducted into the Pro Football Hall of Fame in 2014. In 2018, Brooks became a minority investor in the minor league baseball team, the Pensacola Blue Wahoos.

He founded Derrick Brooks Charities, Inc. in Pensacola in 1997, which worked to develop educational youth programs and opportunities in the Tampa Bay community. In partnership with Pro Football Hall of Famer Edward J. DeBartolo Jr., Brooks co-founded the Brooks-DeBartolo Collegiate High School in Tampa in 2005. Brooks received an honorary doctorate degree in human letters from St. Leo University, in St. Leo, Florida in 2006.

Derrick Brooks was interviewed by The HistoryMakers on September 12, 2018.