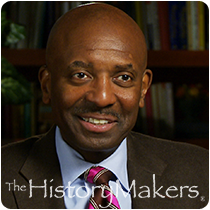 See how Derek McGinty is related to other HistoryMakers
Donate Now

McGinty was hired first as a desk assistant for ABC Radio News in the Washington bureau, and then became a reporter for United Press International's Washington Metro desk. From 1984 to 1991, McGinty worked as an anchor/reporter for WHUR-FM, where he went on to co-host “The Daily Drum,” a news and interview program covering local politics. He then hosted the radio talk show called “The Derek McGinty Show” from 1991 to 1998 on WAMU in Washington, D.C. His guests included former Washington, D.C. Mayor Marion Barry, former Secretary of State James Baker, former House Speaker Newt Gingrich, jazz musician Wynton Marsalis, rapper Ice-T and author Robert Ludlum, among others. McGinty also served as an anchor for News Channel 8 in Washington, D.C. in 1994. In addition, he worked as a correspondent for the PBS series "State of the Union," as a moderator for "Straight Talk with Derek McGinty" on Washington, D.C.'s WETA-TV, and as a correspondent for the CBS News program "Coast to Coast." He has also served as host of WETA's public affairs program "Here & Now," guest host of NPR's All Things Considered, and host of Discovery Channel's weekly online talk show, "Live! With Derek McGinty."

In 1998, McGinty left WAMU and was hired as a correspondent on the CBS News program “Public Eye with Bryant Gumbel.” He then served as a correspondent for “Real Sports” on HBO from 1999 to 2003, and worked as a reporter and anchor for WJLA from 1999 to 2001. From 2001 to 2003, he was co-anchor of ABC's “World News Now,” and anchor of “World News This Morning.” In 2003, McGinty joined WUSA, where he serves as the weekday anchor for WUSA 9 News at 7pm and weeknight co-anchor for WUSA 9 News at 5pm, 6pm and 11pm. He was also the host of “Eye on Washington.” McGinty has written articles that have appeared in The New York Times; The Washington Post; The New York Daily News; and Washingtonian Magazine.

In 1994, “The Derek McGinty Show” received the Gold Award for Public Affairs Programming from the Corporation of Public Broadcasting, the highest programming honor in public radio.

Derek McGinty was interviewed by The HistoryMakers on March 19, 2014.

See how Derek McGinty is related to other HistoryMakers
Donate Now
Click Here To Explore The Archive Today!