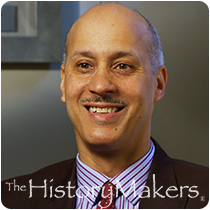 Favorite Color:
Maroon and Blue
Favorite Food:
Seafood
Favorite Time of Year:
Summer
Favorite Vacation Spot:
North Carolina, South Carolina beaches
Favorite Quote:
For We Are God’s Workmanship Created In Christ Jesus To Do Good Work That Was Planned In Advance For Us To Do.

Favorite Color:
Maroon and Blue
Favorite Food:
Seafood
Favorite Time of Year:
Summer
Favorite Vacation Spot:
North Carolina, South Carolina beaches
Favorite Quote:
For We Are God’s Workmanship Created In Christ Jesus To Do Good Work That Was Planned In Advance For Us To Do.

See how Derek Ferguson is related to other HistoryMakers

Entertainment company executive Derek Ferguson was born on April 20, 1965 in the Bronx, New York to Roberta Lewis Pieck and James Ferguson. He attended Stuyvesant High School, and, at the age of sixteen, was accepted into the Wharton School at the University of Pennsylvania, where he graduated in 1985 with his B.S. degree in economics. Upon graduation, Ferguson was hired as an auditor and mergers and acquisitions analyst at Coopers and Lybrand (now PricewaterhouseCoopers) and became a certified public accountant. In 1988, he co-founded and served as chief operating officer of Urban Profile Communications Inc., which produced the Urban Profile lifestyle magazine. In 1990, Ferguson received his M.B.A. degree from Harvard Business School, where he was also vice president of the African American Student Association.

In 1991, Ferguson sold Urban Profile Communications Inc. and secured a position at Bain and Company in Boston, Massachusetts. At Bain, he became one of the first two African Americans to be promoted to manager. In 1996, he was named vice president of worldwide finance at Sony BMG Entertainment, and was then appointed vice president of finance and operations for BMG Special Products. In 1998, Ferguson was hired as Bad Boy Worldwide Entertainment Group’s chief financial officer, where he was responsible for business development, business planning and forecasting, and financial operations of the Bad Boy family of companies. Ferguson has since been named chief growth officer of Bad Boy Worldwide Entertainment Group and reports directly to the company’s chairman, Sean “Diddy” Combs.

Ferguson is a member of New York Covenant Church in New Rochelle, New York, where he is the leader of the Economic Justice ministry. Through this ministry, the Church has launched various businesses, including Cross Trainers Apparel, Covenant Building Services and Life Music. In addition, Ferguson has held bible studies for employees at Bad Boy Worldwide for a number of years.

His awards include the Maggie L. Walker Award for the African American at the Wharton School with the highest grade point average, and the Emma Higginbotham award for academic achievement and community involvement.

Ferguson is married to Regina Bullock Ferguson. They have three children; Reginald, Maya and Peri.

Derek Ferguson was interviewed by The HistoryMakers on May 5, 2014.

See how Derek Ferguson is related to other HistoryMakers
Click Here To Explore The Archive Today! 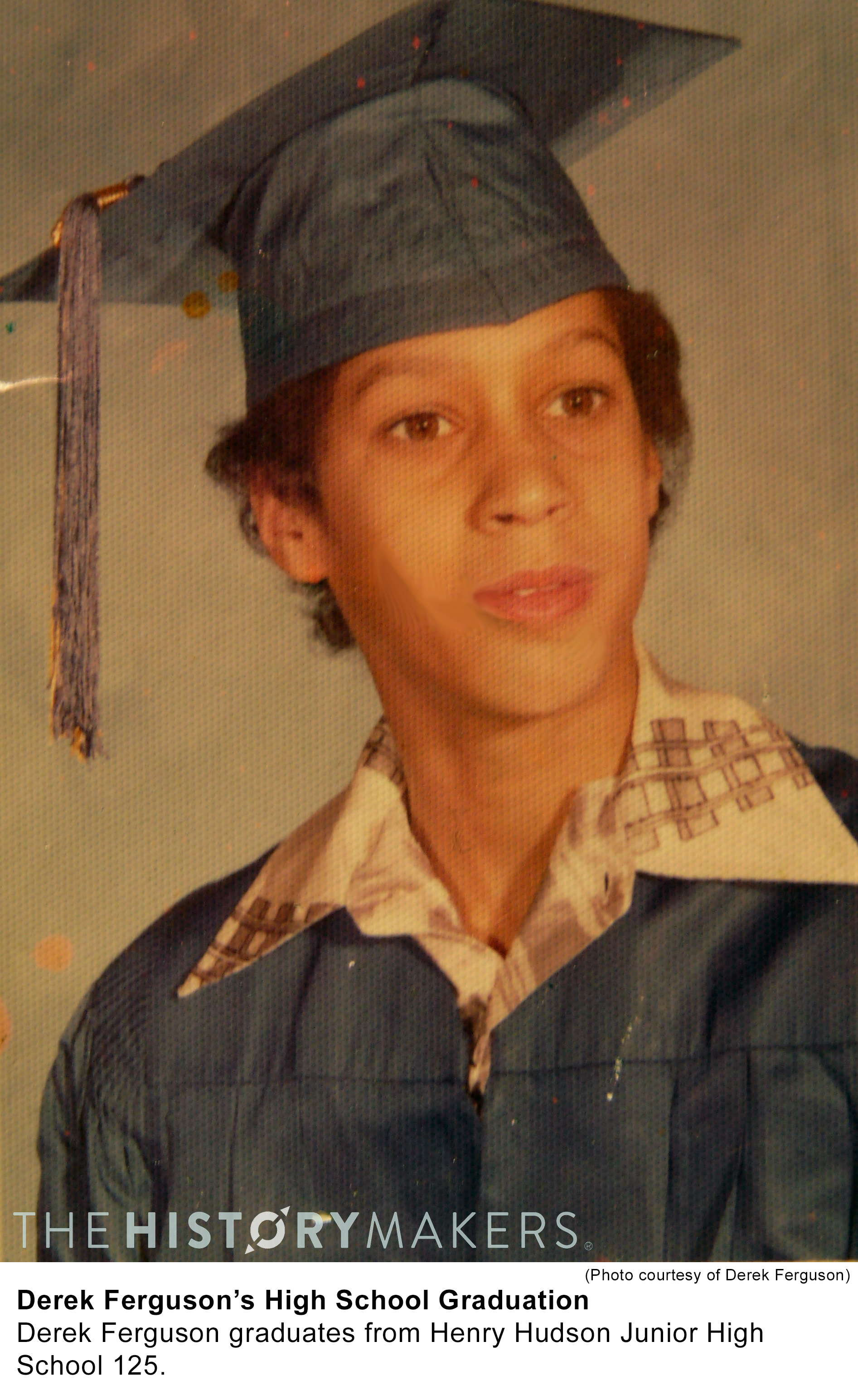 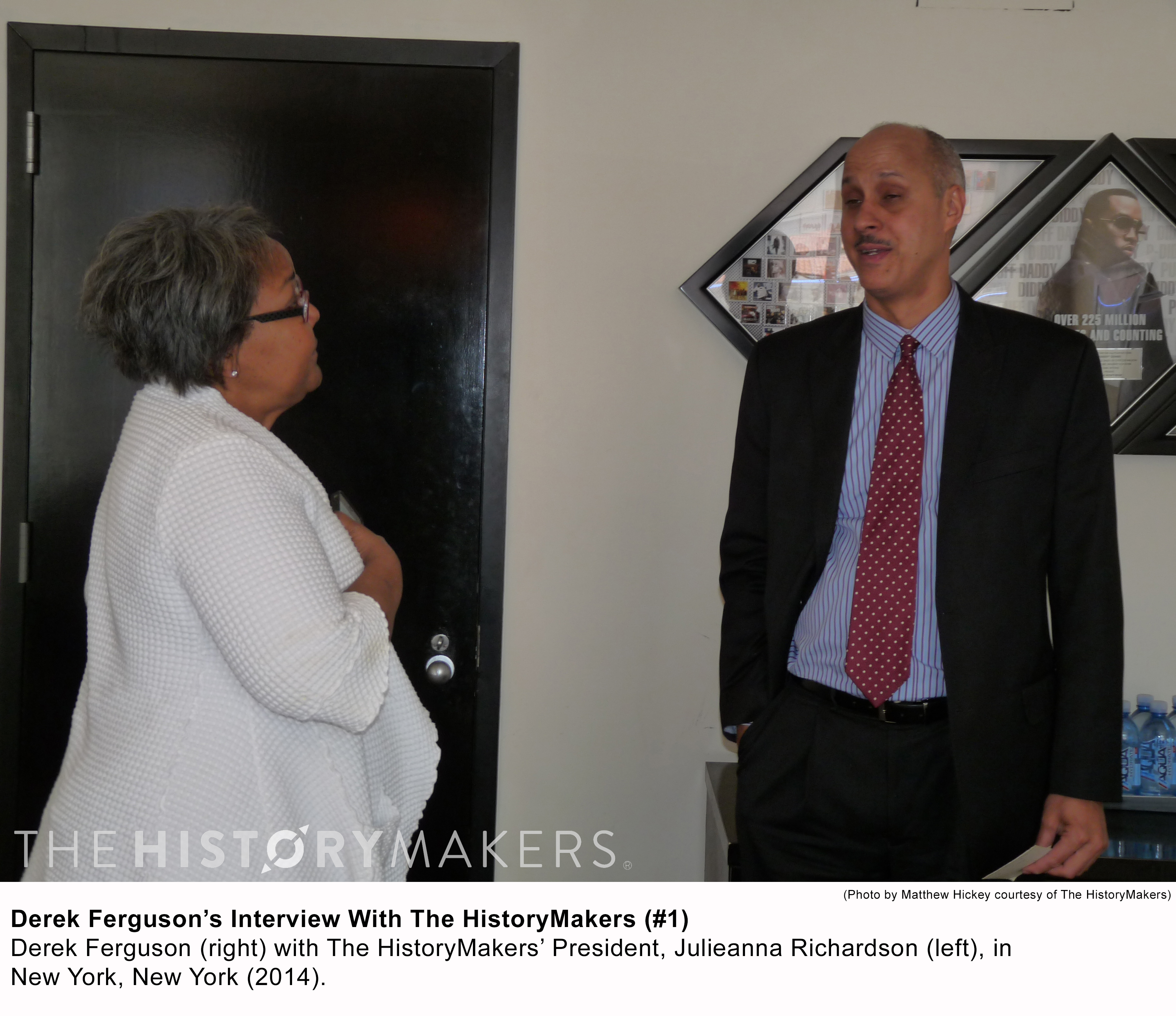