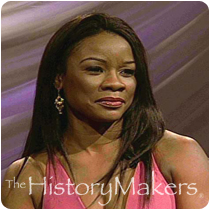 See how Denyce Graves is related to other HistoryMakers

Recognized worldwide as one of today’s most exciting vocal stars, Denyce Graves continues to gather unparalleled popular and critical acclaim in performances on four continents. USA Today identified her as one of the “singers most likely to be an operatic superstar of the 21st Century,” and after a recent performance in Atlanta, the Journal-Constitution exclaimed, “if the human voice has the power to move you, you will be touched by Denyce Graves.”

Graves made her debut at the Metropolitan Opera in the 1995-96 season in the title role of Carmen. She returned the following season to lead the new Franco Zeffirelli production of this work, conducted by James Levine, and she sang the opening night performance of the Metropolitan Opera’s 1997-98 season as Carmen opposite Placido Domingo. She was seen again that season as Bizet’s gypsy on the stage of the Metropolitan Opera for Domingo’s 30th Anniversary Gala, and she made her debut in Japan as Carmen, opposite the Don Jose of Roberto Alagna. Also, in 1997, PBS Productions released a video and audio recording titled, Denyce Graves: A Cathedral Christmas, featuring Graves in a program of Christmas music from Washington’s National Cathedral. This program airs every Christmas season on PBS. Graves also appeared in a new production of Samson et Dalila opposite Domingo at the Metropolitan Opera, and she was partnered again with Domingo in the 1999 season-opening performances of this work for the Los Angeles Opera. She was seen as Saint Saens’ seductress with Royal Opera, Covent Garden and The Washington Opera, both opposite Jose Cura – the latter under the baton of Maestro Domingo, as well as with Houston Grand Opera. Her debut in this signature role came in 1992 with the Chicago Symphony at the Ravinia Festival under the direction of James Levine and opposite Mr. Domingo and Sherrill Milnes, and she made a return engagement to the Festival in this same role in 1997.

Graves appears continually in a broad range of repertoire with leading theatres in North America and Europe. She recently sang her first performances of Judith in a William Friedkin production of Bartok’s Bluebeard’s Castle in her return to Los Angeles Opera. Highlights of the mezzo-soprano’s other recent appearances include her first performances of the title role in La Perichole with the Opera Company of Philadelphia; a rare double-bill of El amor brujo and La vida breve specifically mounted for her by Dallas Opera; Federica in the Metropolitan Opera’s new production of Luisa Miller, led by James Levine; and Nicklausse in Les contes d’Hoffmann with The Washington Opera. Graves’ debut with the Theatre Musical de Paris – Chatelet was a Baba the Turk in a Peter Sellars/Esa-Pekka Salonen production of The Rake’s Progress, and she returned to Covent Garden as Cuniza in Verdi’s Oberto after her debut performances as Carmen. Her debut at Teatro alla Scala was as the High Priestess in La vestale led by Riccardo Muti, and she soon returned as Giulietta in a new production of Les contes d’Hoffmann and as Mere Marie in the Robert Carsen production of Les dialogues des Carmelites. Her first performances as Dulcinee in Massenet’s Don Quichotte were with The Washington Opera. She appeared at Teatro Bellini in Catania in the title role of La favorite, and audiences in Genoa saw her first performances of Charlotte in Werther soon after her debut there as Carmen. In 1999, Graves repeated the role of Charlotte for Michigan Opera Theatre opposite the Werther of Andrea Bocelli in his first staged operatic performances. Her debut in Austria came as Carmen with the Vienna Staatsoper, and she has also been seen in this role with Grand Theatre de Geneve, Genoa’s Teatro Carlo Felice, the Bregenz Festival, and festivals in Macerata, Italy and San Sebastian, Spain. Graves gave her first performances of Adalgisa in Norma for Opernhaus Zurich. In the 1999-2000 season, Graves gave her first performances as Amneris in Aida with Cincinnati Opera.

In 2001, Graves gave a series of appearances in response to the tragic events in New York City, Washington, D.C., and Shanksville, Pennsylvania on September 11, 2001. She was invited by President George W. Bush to participate in the National Prayer Service in Washington’s National Cathedral in which she sang, “America, the Beautiful” and “The Lord’s Prayer.” This event was televised worldwide and was followed by an appearance on The Oprah Winfrey Show in a live musical program of “Healing through Gospel Music.” Graves has gone on to participate in numerous other benefit concerts, and RCA Records released a recording of patriotic songs sung by Graves, whose proceeds are given to various groups affected by the events of September 11, 2001.

In 2003, Graves was appointed as a Cultural Ambassador for the United States, and she now travels around the world under the auspices of the State Department appearing in good-will missions of musical performances, lectures, and seminars. Her first trips in 2003 brought her to Poland, Romania, and Venezuela.

Graves has been the recipient of many awards, including the Grand Prix du Concours International de Chant de Paris, the Eleanor Steber Music Award in the Opera Columbus Vocal Competition, and a Jacobson Study Grant from the Grand Prix Lyrique, awarded once every three years by the Association des amis de l’opera de Monte-Carlo, and the Marian Anderson Award, presented to her by Miss Anderson.

Graves is a native of Washington, D.C., where she attended the Duke Ellington School for the Performing Arts. She continued her education at Oberlin College Conservatory of Music and the New England Conservatory. In 1998, Graves received an honorary doctorate from Oberlin College Conservatory of Music. She was named one of the “Fifty Leaders of Tomorrow” by Ebony magazine and was one of Glamour magazine’s 1997 “Women of the Year.” In 1999, New York’s WQXR Radio named Graves one of classical music’s “Standard Bearers for the 21st Century.”

Graves was interviewed by The HistoryMakers on October 22, 2005.

See how Denyce Graves is related to other HistoryMakers
Click Here To Explore The Archive Today!