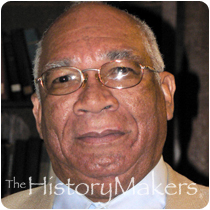 See how Dennis Terry is related to other HistoryMakers
Donate Now

After graduation Terry became the operations manager for the Long Island Lighting Company. In 1971, motivated by the concept of “diverse cultural groups coming together to produce the common good,” Terry and others founded the Mid Bronx Senior Citizens Council (MBSCC). The MBSCC was established as an advocacy group for the elderly focusing on the deteriorating areas of New York City’s South Bronx community.

In 1972, Terry became the chairman of the New York Urban League’s Bronx Borough Board and attended the National Black Political Convention held in Gary, Indiana. From 1976 until 1996, Terry was a board member of the South Bronx Overall Economic Development Corporation (SoBRO), a company that sought to reverse the flight of jobs and business from the South Bronx. Terry was also a board member of the Bronx Lebanon Hospital from 1981 to 1982. Terry retired to his residence in the Bronx, New York.

Dennis Leon Terry was interviewed by The HistoryMakers on October 25, 2007.

See how Dennis Terry is related to other HistoryMakers
Donate Now
Click Here To Explore The Archive Today!