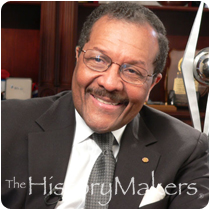 See how Dennis Hightower is related to other HistoryMakers
Donate Now

Broadcast executive and business professor Dennis Fowler Hightower was born on October 28, 1941 in Washington, D.C. to Marvin William Hightower and Virginia Fowler Hightower, an educator. After graduating from McKinley High School in 1958, Hightower attended Howard University where he earned his B.S degree in 1962. In addition to joining Kappa Alpha Psi fraternity and being a college athlete, Hightower was the top graduating cadet of the Army ROTC university program.

After graduating from Howard University, Hightower was commissioned as a 2nd Lieutenant in the U.S. Army, where he served as a platoon leader and company commander in the 101st Airborne Division. Afterwards, Hightower was trained as a counterintelligence officer and field operations intelligence officer, working in strategic and operational assignments in the United States and abroad. Hightower also served in Vietnam in the 199th Light Infantry Brigade, where he was promoted to the rank of major. Hightower was awarded two Bronze Star medals, a Purple Heart, three Air Medals, the Joint Service Commendation Medal, five Army Commendation Medals with distinction for valor, the Vietnam Honor Medal First Class, and the Combat Infantryman Badge.

In 1970, Hightower was hired by Xerox as manager of organizational planning. He left his position there in 1972, when he was awarded a fellowship to attend Harvard Business School. He graduated in 1974 with his M.B.A. Hightower then joined McKinsey & Company and worked as a senior associate and engagement manager until 1978, when he was hired by General Electric’s Lighting Business Group. In 1987, Hightower was hired by The Walt Disney Company as vice president of Consumer Products for Europe, based in Paris, France, and later became president of Consumer Products for Europe, Middle East and Africa divisions. In 1995, he was promoted to president of Walt Disney Television and Telecommunications.

Upon his retirement in 1996, Hightower joined the faculty of Harvard Business School, initially as a senior lecturer and then as a professor of management in the M.B.A. program. On August 11, 2009, Hightower was appointed by President Barack Obama as deputy secretary of commerce. Hightower was charged with general management duties until his tenure ended on August 27, 2010.

His numerous awards include the U.S. Department of Commerce Pioneer Award; Harvard Business School Alumni Achievement Award and Bert King Service Award; and an honorary doctorate degree and Alumni Achievement Award for Business from Howard University. He is a board member of Accenture, Ltd., Brown Capital Management, Domino’s Pizza, Inc. and Casey Family Programs, and a former trustee at Howard University.

Dennis Fowler Hightower was interviewed by The HistoryMakers on January 31, 2008.

See how Dennis Hightower is related to other HistoryMakers
Donate Now
Click Here To Explore The Archive Today!