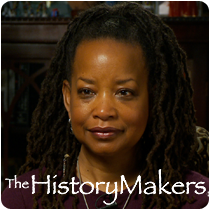 Favorite Color:
Green
Favorite Time of Year:
Summer
Favorite Vacation Spot:
Anywhere Warm
Favorite Quote:
Keep Hope Alive. If It's To Be, It's Up To Me.

Favorite Color:
Green
Favorite Time of Year:
Summer
Favorite Vacation Spot:
Anywhere Warm
Favorite Quote:
Keep Hope Alive. If It's To Be, It's Up To Me.

See how Denise Rolark-Barnes is related to other HistoryMakers

Newspaper publisher Denise Rolark-Barnes was born in Washington, D.C. Her father, Dr. Calvin W. Rolark, Sr., was the founder and the editor of the The Washington Informer; her stepmother, Wilhelmina J. Rolark, a politician and activist, served on the Council of the District of Columbia from 1976 to 1984. Rolark-Barnes was interested in writing at a young age and first wrote for the The Washington Informer while she was in middle school. After graduating from Howard University in 1976 with her B.A. degree in communications, Rolark-Barnes enrolled in the Howard University School of Law where she became editor of The Barrister, the law schools’ student newspaper. Rolark-Barnes graduated from the Howard University School of Law with her J.D. degree in 1979.

Rolark-Barnes is the president of the District of Columbia chapter of AARP and is a member of the board of the National Newspaper Publishers Association and the United Black Fund, Inc. She is actively involved with the District of Columbia Black Public Relations Society Foundation, the Historical Society of Washington, D.C., and several other community non-profit organizations. Through The Washington Informer Charities, Rolark-Barns sponsors the annual Washington Informer City-Wide Spelling Bee as well as internships and writing competitions for high school and college students interested in pursuing careers in journalism.

In March of 2008, Rolark-Barnes was honored by the National Newspaper Publishers Association with the Chrysler Financial/National Newspaper Publishers Association Foundation Entrepreneurial Award, which recognizes the nation’s black-owned newspapers for their entrepreneurial accomplishments and commitments to community service. In 2011, she received the Jack and Lovell Olender Foundation Generous Heart Award and the Summit Health Institute for Research and Education (SHIRE) Community Champion Award.

Rolark-Barnes lives in the Washington, D.C. with her husband, Lafayette Barnes. They have two sons.

Denise Rolark-Barnes was interviewed by The HistoryMakers on March 7, 2013.

See how Denise Rolark-Barnes is related to other HistoryMakers
Click Here To Explore The Archive Today!