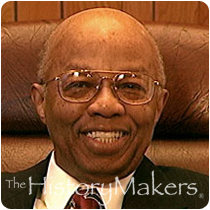 See how Dempsey J. Travis is related to other HistoryMakers
Donate Now

Dempsey Jerome Travis was born on February 25, 1920, in Chicago, Illinois. Travis attended Roosevelt University, where he received his bachelor’s degree in 1949. That same year, he founded Travis Realty Corporation and became its president. In addition to his responsibilities at Travis Realty, Travis also served as president of Sivart Mortgage Company. At the helm of these two companies, Travis was able to establish himself firmly in the real estate development of Chicago’s South Side throughout the latter half of the twentieth century. In 1960, Travis founded United Mortgage Bankers of America, as well as the Dempsey Travis Securities and Investment Corporation, which he served as president until 1974. Also in the 1960s, Travis returned to school and received an advanced degree from the School of Mortgage Banking at Northwestern University in 1969.

As passionate about the arts as about his entrepreneurial career, Travis founded the Urban Research Press in 1969 as a forum for the publication of African American literature and nonfiction. To date, Urban Research Press has published seven best-selling nonfiction books by Travis, as well as those of several other authors. Each of these works analyzes a specific aspect of the African American experience. A few of Travis’ major topics include the role of jazz culture in postwar society and the participation of African Americans in state and federal politics. Some of his many titles include, The Victory Monument, I Refuse to Learn to Fail, Views from the Back of the Bus and An Autobiography of Black Jazz, which won the Art Deco Award in 1985. As a literary figure, Travis served as president of the Society of Midland Authors from 1988 to 1990, financial editor for Dollars and Sense for several years, and as a contributing writer for Ebony and The Black Scholar.

As a participant in the Civil Rights Movement, Travis was firmly committed to the reform of social injustice. He was a coordinator of Dr. Martin Luther King, Jr.’s 1960 March on Chicago, one of the first civil rights marches in the nation. Travis was also the president of the NAACP Chicago Chapter from 1959 to 1960 and participated in several presidential administrations including President Lyndon Johnson’s 1966 Civil Rights Meetings, President Richard Nixon’s Housing Task Force and President Gerald Ford’s Presidential Task Force on Urban Renewal.

Travis’ awards and recognitions are an accurate reflection of his accomplishments within business, politics and the arts. He is listed in Who’s Who in America, Who’s Who in Finance and Industry, and Who’s Who in the World. He was also listed among the “People Who Have Made a Difference” by the Chicago Sun-Times and was one of Ebony magazine’s “100 Most Influential Black Americans.” Travis was also the subject of numerous television programs: five of these shows have received Emmy nominations. Perhaps his greatest honor, however, was receiving Black Enterprise magazine’s “First Annual Finance Achievement Award” on February 21, 1975 by Vice President Nelson Rockefeller at the White House.

See how Dempsey J. Travis is related to other HistoryMakers
Donate Now
Click Here To Explore The Archive Today! 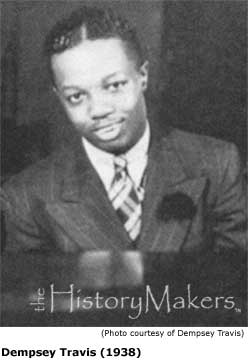 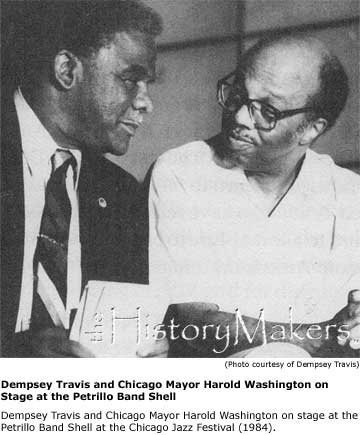