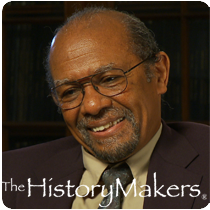 Favorite Color:
Blue
Favorite Food:
Seafood
Favorite Time of Year:
Summer
Favorite Quote:
Knowledge Is A Value In Itself, It Need Serve No Other Purpose In The World.

Favorite Color:
Blue
Favorite Food:
Seafood
Favorite Time of Year:
Summer
Favorite Quote:
Knowledge Is A Value In Itself, It Need Serve No Other Purpose In The World.

See how Demetrius Venable is related to other HistoryMakers

Physicist and physics professor Demetrius D. Venable was born on October 11, 1947 in Powhatan, Virginia to Josephine Viola Bell Venable and James Bernard Venable. He attended Pocahontas High School where Venable’s father, who was his high school math teacher, helped spark Venable’s interest in math and science. He received his B.S. degree in physics from Virginia State College in 1970. Continuing with his studies, he earned his M.S. and Ph.D. degrees in physics from American University in 1972 and 1974, respectively.

Upon completion of his Ph.D. program, Venable was hired by IBM-East Fishkill where he studied semi-conductor measurement technology as a senior associate engineer. After two years with the company, Venable returned to academia at Saint Paul’s College as an assistant professor of physics and director of the Cooperative Physics Program. In 1978, he joined the faculty of Hampton Institute (now Hampton University) as an assistant professor of physics. One of Venable’s major accomplishments at Hampton was his instrumental role in founding the doctorate program in physics. He held numerous positions at Hampton, ultimately becoming executive vice president and provost in 1994. When he moved to Howard University in 1995, he was named the chairman of the department of physics and astronomy, a post that he held until 2007. During his tenure at Howard University, Venable helped create the interdisciplinary doctorate program in atmospheric sciences. He also was instrumental in establishing atmospheric physics research at the Howard University Beltsville Research Campus and the Raman Lidar Program. With a specialty in optical physics, Venable has studied water vapor mixing ratios and atmospheric dynamics to further his group’s goal of weather and climate predictability.

Throughout his career, Venable has received numerous recognitions including the National Aeronautic and Space Administration’s Distinguished Public Service Medal and the White House Initiative Science and Technology Advisory Committee’s Faculty Award for Excellence in Science and Technology. Venable served as chairman of the American Institute of Physics’ Advisory Committee on Education from 1998 to 2001 and he is a charter fellow of the National Society of Black Physicists. He has served on various boards and committees at the state and national levels including on the U. S. Department of Energy's Fusion Energy Advisory Committee, The American Association of Physics Teachers, The Virginia Academy of Science, The Southeastern Universities Research Association, The Virginia Aerospace Business Roundtable and The National Physical Sciences Consortium. Venable is married Geri Turner. They have raised two children, Juanita and Jessica.

Demetrius Venable was interviewed by The HistoryMakers on June 14, 2012.

See how Demetrius Venable is related to other HistoryMakers
Click Here To Explore The Archive Today!