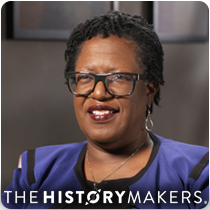 Favorite Color:
Royal blue
Favorite Food:
Pancakes with homemade syrup
Favorite Time of Year:
Spring
Favorite Vacation Spot:
Italy or South Africa
Favorite Quote:
If it were easy everybody would so it.

Favorite Color:
Royal blue
Favorite Food:
Pancakes with homemade syrup
Favorite Time of Year:
Spring
Favorite Vacation Spot:
Italy or South Africa
Favorite Quote:
If it were easy everybody would so it.

See how DeMetris Sampson is related to other HistoryMakers

Sampson began her career as chief counsel for the Texas House of Representatives’ Judicial Affairs Committee in 1981. She remained as chief counsel until 1985, when she became the assistant district attorney for Dallas County in Texas. Sampson then joined the law firm of Blair, Goggan, Sampson & Meeks and became the first African American partner of a major Dallas, Texas law firm. She then joined Linebarger, Goggan, Blair & Sampson, LLP as a managing partner. Sampson was the first African American woman to be named a managing partner in a majority firm in Dallas, Texas. She also served as an advisor to Ron Kirk, who was the first African American mayor of Dallas from 1995 until 2002. Sampson retired from Linebarger, Goggan, Blair & Sampson, LLP in 2014.

In 1990, Sampson was named an Outstanding Young Texan by the University of Texas, Dallas. She also received distinguished honors from the university in 2008 and was awarded the Legacy of Service Foundation Award in 2012. At her retirement in 2014, Sampson was honored by Eddie Bernice Johnson of Texas on the floor of the U.S. House of Representatives for her distinguished career. She was also awarded the 25th Image Award by the Legacy of Service Foundation in 2017.

During her career, Sampson served as a member of University of Texas President William Cunningham’s Black Alumni Advisory Committee, as a member of the Ex Students Association’s Black Alumni Task Force, as a member of Alpha Kappa Alpha sorority, and as board chair for the Zan Wesley Holmes Jr. Community Outreach Center. She also served as president of the J.L. Turner Legal Association and as president of the Dallas Association of Black Women Attorneys. In 1994, she was named to East Texas State University’s Board of Regents.

DeMetris Sampson was interviewed by The HistoryMakers on September 16, 2017.

See how DeMetris Sampson is related to other HistoryMakers