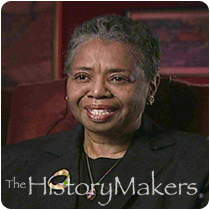 Favorite Color:
Black
Favorite Time of Year:
Spring
Favorite Vacation Spot:
Bermuda
Favorite Quote:
He That Dwell In The High Places Of God Will Be At Peace.

Favorite Color:
Black
Favorite Time of Year:
Spring
Favorite Vacation Spot:
Bermuda
Favorite Quote:
He That Dwell In The High Places Of God Will Be At Peace.

See how Delores Brisbon is related to other HistoryMakers
Donate Now

Hospital CEO Delores Flynn Brisbon was born February 12, 1933, in Jacksonville, Florida, to Felton A. and Inez Ellis Flynn. Brisbon attended Douglas Anderson Elementary School and graduated salutatorian from Stanton High School in 1950. Brisbon earned her B.S. degree in nursing from Tuskegee University in 1954; later, in 1974, she was awarded a sociology degree from the University of Pennsylvania.

From 1954 to 1956, Brisbon worked as assistant to the director of nursing services and as a clinical instructor for Tuskegee University’s John Andrew Hospital. In 1957, Brisbon became director of Nursing Services at Dillard University’s Flint Goodridge Hospital. Moving back to Tuskegee, Brisbon married James Brisbon; the couple then moved to Philadelphia where she became head nurse at the University of Pennsylvania Hospital in 1959. Brisbon was promoted to supervisor of medical nursing in 1962, and in 1974, became staff person to the executive director. In 1975, Brisbon was hired as director of planning and systems where she led the construction of the $46 million Silverstein Pavilion and the $116 million Founders Pavilion. In 1980, Brisbon was appointed chief operating officer, managing a budget of over $300 million; she guided a multi-million dollar construction project before retiring after her husband’s illness in 1986. In 1987, Brisbon formed Brisbon and Associates, a healthcare consulting firm which she operated until 2003.

Active in the Philadelphia community, Brisbon was responsible for negotiations with the University of Pennsylvania that resulted in the relocation and construction of the Walnut Child Care Center. Brisbon also served on the boards of Eastern University; Mercy Health System; Eastern Baptist Seminary; and Community College of Philadelphia. Brisbon founded and served as chairperson of the board of the Mother Bethel Foundation for which she has raised a million dollars. In addition to her professional activities, Brisbon has raised two children.

See how Delores Brisbon is related to other HistoryMakers
Donate Now
Click Here To Explore The Archive Today!