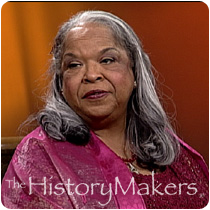 See how Della Reese-Lett is related to other HistoryMakers

The name Della Reese is synonymous with entertainment and excellence. Starting her career in entertainment as a singer, she developed her own style with romantic ballads and other songs that utilized her unique blend of jazz, blues and gospel and phrasing that to this day makes for a sound that is unmistakably Della Reese.

Reese, born Deloreese Patricia Early in Detroit, Michigan, began singing in church when she was six years old. Throughout her formative years, Reese sang gospel music, and at age thirteen, she was hired by the late Mahalia Jackson to sing with her group.
Her big break came when she won a contest that gave her a week singing at Detroit’s famed “Flame Show Bar.” That week soon became eight weeks. This experience and others exposed Reese to the talents and styles of such music greats as Ella Fitzgerald, Dinah Washington, Sarah Vaughn, Billie Holiday, Al Hibbler, Billy Eckstine and others.

In 1953, Reese moved to New York City and became a vocalist with the Erskine Hawkins Orchestra, and shortly thereafter, signed a recording contract with Jubilee Records. Reese had her first major hit with “And That Reminds Me (of you).” That same year, she was voted “The Most Promising Singer” by Billboard, Cashbox, and Variety, as well as the Disc Jockeys of America and the Jukebox Operators Association.

Reese signed a new recording contract in 1959, with RCA, and subsequently enjoyed her biggest hit, a tune adapted from Puccini’s La Boheme, entitled “Don’t You Know”. Acknowledgement from the music industry followed as she was nominated for a Grammy Award as best female vocalist. This led to Reese performing for the next nine years in Las Vegas, Nevada. In the thirty years that followed “Don’t You Know,” Reese has continued recording.

In the late 1950’s and early 1960’s, Reese launched a successful television career. She appeared on many television shows that are now considered classics, including The Perry Como Show, The Jackie Gleason Show, as well as more than twenty appearances on The Ed Sullivan Show. Her success continued over the years, with numerous appearances on television and in movies. In 1994, Reese was tapped to star in the hit series Touched by an Angel. Reese was honored for her talents in 1994 with a star on the Hollywood Walk of Fame.

In addition to her singing and acting, Reese led a deeply spiritual life. In 1986, she was ordained as a minister by the Rev. Dr. Johnnie Colemon, and she gave weekly sermons at her church, Understanding Principles For Better Living, in Los Angeles.

Reese was interviewed by The HistoryMakers on June 18, 2004.

See how Della Reese-Lett is related to other HistoryMakers
Click Here To Explore The Archive Today!