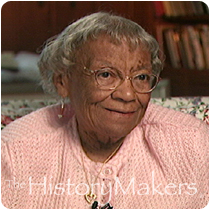 See how Della Hardman is related to other HistoryMakers

Arts educator Della Hardman was born on May 20, 1922, in Charleston, West Virginia; her mother, Captolia Brown, was a teacher, and her father, Anderson Hunt Brown, owned a meat market in Charleston and later worked as a realtor for fifty years. Following the death of her mother, Hardman was raised by her aunt Della Brown, a teacher who always encouraged her young niece to pay attention in school, especially in history. After graduating from Garnet High School in 1940, Hardman enrolled in West Virginia State College, where she earned her B.S. degree in education in 1943. From there, Hardman continued her education at the Massachusetts College of Art, and earned her M.A. degree from Boston University in 1945. Hardman continued on with her education throughout her lifetime, earning her Ph.D. from Kent State University in 1994; she also attended numerous educational institutes both in the United States and abroad.

While attending college, Hardman worked throughout the summers at her father’s real estate office, where she was a licensed real estate broker in West Virginia until 1986. In 1952, Hardman took a position with the Fogg Art Museum at Harvard University, where she remained for two years; from there, she began teaching art in the Boston Public Schools. In 1956, Hardman became an associate professor of art at West Virginia State College; she continued in that post for the next thirty years. During her tenure at West Virginia State College, Hardman also lectured at a number of other universities and art galleries. Concurrently, Hardman hosted The Black Experience on WKAZ in Charleston between 1978 and 1988.

Throughout the course of her life, Hardman served actively with a number of groups, including acting as a chairperson of the board of trustees of the Charleston Art Gallery, and being a member of the National Art Education Association (NAEA) and the National Association of Art Administrators. Hardman was recognized as an Alumna of the Year by her alma mater, West Virginia State College; as the Outstanding Art Educator by the NAEA; and was named commissioner of the West Virginia Arts and Humanities Council by Governor John D. Rockefeller.

Hardman traveled extensively around the globe, and was the proud mother of three, including HistoryMaker Andrea Taylor and grandmother of seven; she passed away on December 13, 2005, at the age of eighty-three.

See how Della Hardman is related to other HistoryMakers
Click Here To Explore The Archive Today!