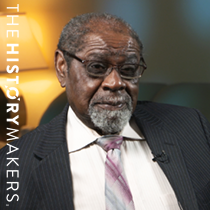 See how Delano Stewart is related to other HistoryMakers
Donate Now

Lawyer Delano Stewart was born on November 9, 1935 in Tampa, Florida to Beatrice Hill Stewart and Garland V. Stewart. He went on to earn his B.A degree in political science at his father’s alma mater, Morehouse College in Atlanta, Georgia. From there, he attended Howard University School of Law in Washington, D.C., during which time he attended the March on Washington in 1963. He also served in the U.S. Air Force. Upon graduating in 1964, Stewart returned to Tampa, Florida, where he became the first African American board member for the Hillsborough County Young Democrats.

Stewart had a stellar career as a criminal and civil trial lawyer. He served as the first president of the George Edgecomb Bar Association from 1982 to 1983. Stewart was elected as the first African American on the Hillsborough County Bar Association Board of Directors.  He continued his community and political activism by running for the Florida House of Representatives in 1966 and Tampa City Council in 1970. Undeterred by these unsuccessful races, he continued to spend his Saturdays registering African American voters. Stewart is a Founder of the Tampa Organization of Black Affairs (1980), and the first African American member of the Rough Riders civic organization, of which he is a life member. He is also a member of the National Bar Association’s Hall of Fame.

Stewart is married to Carolyn House Stewart, who was the first African American female assistant state’s attorney in Hillsborough County. He has six daughters, eight grandchildren, and one great grandson.

Delano Stewart was interviewed The HistoryMakers on September 10, 2018.

See how Delano Stewart is related to other HistoryMakers
Donate Now