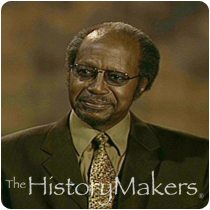 See how Delano O'Banion is related to other HistoryMakers

Delano O’Banion was born on November 3, 1936 in Chicago, Illinois. He attended Chicago public schools from elementary through high school. While a student at Phillips High School, he played the clarinet and bassoon in the Phillips Concert Band. As a senior at Phillips High School, O’Banion became a student assistant band director and drum major under Professor Earl Madison. In addition to singing various classical styles of choral music, he learned to sing oratorio and opera in the Hartzell Methodist Church’s Young People Choir (1951-1955). During this period, he received a scholarship to study voice with Madame Elsa Harthan Arendt at the Sherwood Music School in Chicago, Illinois.

Upon graduation from Fisk University in 1959 with his B.S. degree in music, O’Banion began a teaching career that spanned forty-six years. O’Banion became quite active as a classical soloist, singing oratorio, opera, recitals, and major orchestral works throughout the Midwest. In 1961, along with several alumni friends from Fisk University, O’Banion established The John Work Chorale. His love for conducting this choral group became his primary work. The John Work Chorale specializes in preserving nurturing the perpetuation of singing Negro Spirituals in the original style of the Fisk Jubilee Singers. O’Banion also served as the choral director at Marshall High School for several years.

O’Banion was interviewed by The HistoryMakers on November 15, 2006.

See how Delano O'Banion is related to other HistoryMakers
Click Here To Explore The Archive Today!