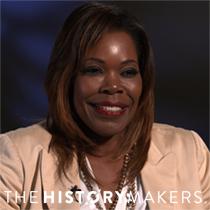 See how Dee Robinson is related to other HistoryMakers
Donate Now

Entrepreneur Dee Robinson was on born on January 21, 1961. She received her B.A. in economics from the University of Pennsylvania in Philadelphia, and her M.B.A. degree in marketing and policy management from Northwestern University’s J. L. Kellogg School of Management in Evanston, Illinois in 1988. She also later completed the Dartmouth College Tuck School of Business Executive Education program in Hanover, New Hampshire.

Robinson has served as board director for Wintrust Bank, the Illinois Gaming Board; Meridian Healthcare Advisory Board, and Committee for Amazon HQ2.

Dee Robinson was interviewed by The HistoryMakers on May 3, 2018.

See how Dee Robinson is related to other HistoryMakers
Donate Now