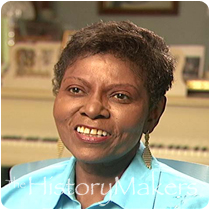 See how Dee Dee Warwick is related to other HistoryMakers

One of the most powerful soul singers of all time, Dee Dee Warwick was born Delia Warwick on September 25, 1945, in Newark Heights, New Jersey, into a musical family with its roots steeped in gospel music. Her mother, Arthur Lee Drinkard Warrick, was a founding member of the acclaimed Drinkard Singers, whose line-up included her aunt Cissy Houston. The Drinkard Singers sang regularly at the New Hope Baptist Church in Newark, New Jersey.

As a young teen, Warwick and her older sister Dionne formed their own group called the Gospelaires; the group often appeared with the Drinkard Singers. In 1959, the Warwick sisters got their first big break in the music industry at the famed Apollo Theater in Harlem when they were asked to sing background vocals in a studio session for Sam Taylor. During this session with Savoy Records, the song “Won’t You Deliver Me” was recorded; this was the Warwick sisters’ recording debut. Warwick would go on to be featured in hundreds of recordings that were made in New York between 1960 and 1965.

In 1963, Warwick launched her prolific solo recording career, in which she would become one of the most respected voices in Soul music. Warwick’s discography includes such hits as “I Want To Be With You” and “Foolish Fool;” both of which were recorded for Mercury Records. During the 1970s, Warwick continued to record, adding “She Didn’t Know, She Kept On Talking,” recorded for Atco Records, to her long list of hits. During the 1980s, Warwick recorded albums for Sutra Records and Heritage Records; both of which have become collectors’ items.

After living in Los Angeles and Georgia for a number of years, Warwick moved back to New Jersey, where she started making soul music and appearing in Gospel musicals. Warwick passed away on October 18, 2008, at the age of 63.

See how Dee Dee Warwick is related to other HistoryMakers
Click Here To Explore The Archive Today!