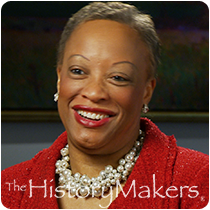 See how Debra Simmons is related to other HistoryMakers
Donate Now

Journalist and newspaper executive Debra Adams Simmons was born in Hartford, Connecticut. Simmons attended Syracuse University’s Newhouse School of Public Communications and the College of Arts and Sciences, from which she received her B.A. degree. She is also a graduate of the Northwestern University Media Management Center’s Advanced Executive Program in its Kellogg Graduate School of Management. Simmons had then planned to attend law school, but in 1986 was offered an internship at the local newspaper in Syracuse.

Simmons worked as a reporter and editor at the Hartford Courant, the Detroit Free Press, and the Virginian-Pilot. In 2003, she became managing editor of the Akron Beacon Journal, a Pulitzer prize-winning newspaper distributed throughout Northeast Ohio. Six months later she was appointed vice president of the newspaper. In 2007, Simmons was hired as managing editor of The Plain Dealer, Ohio’s largest newspaper. Three years later, she was promoted to editor of The Plain Dealer, making her the only minority female running any of the nation’s top twenty-five newspapers.

For her journalistic and community achievements, Simmons has been given the Robert McGruder Award for Diversity by Kent State University's School of Journalism and Mass Communications, named as one of Cleveland’s 40 Under 40 leading executives in Northeast Ohio by Crain’s, won the ATHENA award, and has been inducted into the Women of Color Hall of Fame.

Simmons lives in Copley, Ohio, with her husband, Jonathan. They have two sons; Jacob and Jonathan.

Simmons was interviewed by The HistoryMakers on February 11, 2014.

See how Debra Simmons is related to other HistoryMakers
Donate Now
Click Here To Explore The Archive Today!