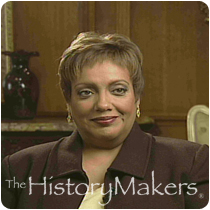 See how Deborah M. Sawyer is related to other HistoryMakers

Sawyer began her career as an environmental scientist for the Ohio Environmental Protection Agency. From 1986 to 1989, Sawyer worked as an environmental scientist for the Solid and Hazardous Waste Management Division of The Ohio Environmental Protection Agency in Columbus, Ohio. Sawyer also entered the private sector in 1986 where she worked as an associate and Midwest operations manager for the URS Corporation in Columbus. Sawyer then became senior vice president, board member & operations manager for the Solid, Toxic, and Hazardous Waste Management Division of Beling Consultants, Inc., in Moline, Illinois, from 1988 through 1990. Sawyer briefly served as the operations manager for the Toxic and Hazardous Waste Management Division of Environmental S/E, Inc. in Glen Ellyn, Illinois. Sawyer then founded her own company, Environmental Design International (EDI), in 1991. The firm had 100 employees, three offices in Illinois and one in Ohio, and an annual revenue of nearly $10 million. EDI provided direction to project managers for solid, toxic, hazardous, and industrial waste, and industrial hygiene projects. Her company held some eighty state and local certifications in seven Midwest states and several federal departments. EDI’s client base included the U.S. Environmental Protection Agency, the Department of Veterans Affairs, the U.S. Army Corps of Engineers, and Chicago Public Schools among others. From 2006 through 2007, EDI worked on Chicago’s Dan Ryan Expressway Reconstruction Project through a $70 million contract for construction inspection.

Sawyer belonged to the American Council of Engineering Companies of Illinois and the Consulting Engineers Council of Illinois. Sawyer was a member of many boards of directors and was honored with numerous awards. She received the U.S. Small Business Administration's Minority Small Business Person of the Year Award at the district, regional and national levels in 1994. Governor George Ryan appointed Sawyer to the Illinois Institute for Entrepreneurship Education in 2001. She also joined the Alliance for the Great Lakes’ board of directors in 2005.

See how Deborah M. Sawyer is related to other HistoryMakers
Click Here To Explore The Archive Today!