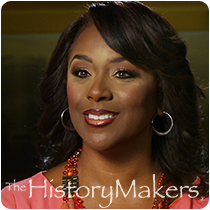 See how Debbye Turner Bell is related to other HistoryMakers

Broadcast journalist and veterinarian Debrah Lynn Turner Bell was born on September 19, 1965 in Honolulu, Hawaii to Gussie Turner and Frederick C. Turner, Jr. Raised in Jonesboro, Arkansas, Turner Bell graduated from Jonesboro High School in 1983. She went on to attend Arkansas State University, where she received her B.S. degree in agriculture in 1986. In 1991, Turner Bell obtained her Doctor of Veterinary Medicine degree from the University of Missouri-Columbia.

In 1989, Turner Bell won the Miss Missouri pageant title. Later the same year, she became the first delegate from the State of Missouri to win the Miss America crown. After winning the title of Miss America, Turner Bell became the national spokesperson for Ralston Purina’s Caring for Pets Program. In 1995, she was hired as a host of the Public Broadcasting Service animal show, “The Gentle Doctor”, and as co-host of KSDK’s entertainment magazine show, “Show Me St. Louis”, where she was nominated for multiple Emmy Awards. From 2001 to 2003, Turner Bell worked as an on-air contributor to CBS networks’ “The Early Show”, and from 2003 until 2012, she served as a staff correspondent for CBS News. In 2013, she was hired as an anchor for Arise News.

Turner Bell has hosted “48 Hours on WE” and appeared on Animal Planet's “Cats 101” and “Dogs 101” series. She has also hosted the Miss Missouri, Miss Florida, and Miss Georgia pageants, and was a Miss America Pageant judge in 1997 and 2011. Turner Bell has appeared as a guest on numerous television programs including “The Late Show with David Letterman”, “Oprah”, and the “Today” show. In addition, she has served as a motivational speaker for over twenty years.

She has served on local, state and national boards, including the Children’s Miracle Network, the National Council on Youth Leadership, the Missouri Division of Youth Services, the Mathews-Dickey Boys Club, and the National Advisory Child Health and Human Development Council as part of the National Institutes of Health. She served as director of the Consortium of Doctors from 1994 to 1995.

Turner Bell lives in the New York City area with her husband and daughter.

Debbye Turner Bell was interviewed by “The HistoryMakers” on August 12, 2014.

See how Debbye Turner Bell is related to other HistoryMakers
Click Here To Explore The Archive Today!