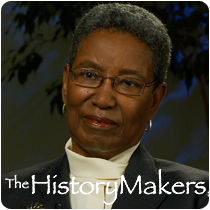 Favorite Color:
All Colors
Favorite Food:
Salmon
Favorite Time of Year:
Spring
Favorite Vacation Spot:
Anywhere Warm
Favorite Quote:
Never doubt what a small group of thoughtful, committed citizens can change the world; indeed, it's the only thing that ever has been successful. -Margaret Mead

Favorite Color:
All Colors
Favorite Food:
Salmon
Favorite Time of Year:
Spring
Favorite Vacation Spot:
Anywhere Warm
Favorite Quote:
Never doubt what a small group of thoughtful, committed citizens can change the world; indeed, it's the only thing that ever has been successful. -Margaret Mead

See how DeAnna Beane is related to other HistoryMakers

Informal science educator and administrator DeAnna Banks Beane was born on January 25, 1940 in Washington, D.C. She became interested in science and nature as a child. Beane attended Howard University and received her B.S. degree in zoology in 1962. Initially she was interested in medical school, but during temporary science teaching assignment, she discovered the joy of introducing science to young people who lacked access to science-rich opportunities. Committed to a career in education, she went on to earn her M.Ed. degree from Rutgers University in 1973.

Between 1966 and 1971, Beane taught science at schools for pregnant teenage girls in Washington, D.C., Chicago, Illinois, and New Brunswick, New Jersey. From 1971 to 1981, she taught earth science, general science, physical science and gifted/talented classes to middle school students in Plainfield, New Jersey. Returning to Washington, D.C. in 1982, Beane worked extensively on issues of racial equity in education. Beane was employed by the Mid-Atlantic Center for Race Equity (a federally-funded school desegregation assistance center at The American University) from 1983 to 1985 where she became interested in the issues of equity in science education. An extensive review of the literature sparked her particular interest in the role that informal science education could play in helping to level the science playing field for African American, Latino, and American Indian children. In 1985, Beane was appointed education director for the National Urban Coalition where she developed a national program to increase minority community involvement in science and mathematics. She joined the Association of Science and Technology Centers, Inc. (ASTC) in 1991 where she directed the Youth Achievement through Learning, Involvement, Volunteering, and Employment initiative (YouthALIVE!), which brought diversity and youth development programs to more than seventy science and children’s museums around the country. As director of Partnerships for Learning at ASTC from 2001 until retirement in 2006, Beane continued her efforts to increase the diversity of staff and visitors in science museums.

Beane is the author of Mathematics and Science: Critical Filters for the Future of Minority Students, a manual that explores the research on factors influencing non-Asian minority student participation in mathematics and science, and identifies intervention strategies and programs. Her articles on school-community-museum partnerships and museum based pre-employment youth programs and their impact on teenagers have appeared in academic and professional journals such as Journal of Negro Education, Journal of Museum Education, and Dimensions: The Bi-monthly News Journal of the Association of Science and Technology Centers.

DeAnna Banks Beane was interviewed by The HistoryMakers on February 12, 2013.

See how DeAnna Beane is related to other HistoryMakers
Click Here To Explore The Archive Today!