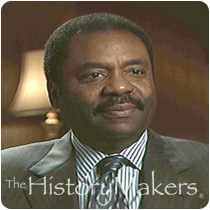 See how David Steward, Sr. is related to other HistoryMakers
Donate Now

Technology entrepreneur David Steward, Sr. was born on July 2, 1951, in Chicago, Illinois. He graduated from Clinton High School in Clinton, Missouri in 1969 and received his B.S. degree in business administration from Central Missouri State University in Warrensburg, Missouri in 1973.

After graduation, Steward worked as a substitute teacher and served as an associate executive for the Boy Scouts of America. In 1974, Steward was hired at Wagner Electric, but was laid off the following year. In 1976, Steward accepted a marketing and sales position with the Missouri Pacific Railroad Company, as the first African American in that role. Steward remained with the company until 1979 when he joined Federal Express and served as a senior account executive. In 1984, Steward founded Transportation Business Specialists, Inc., which audited and reviewed freight-bill and overcharges for the railroad industry. Steward later founded Transport Administrative Services, which was hired by Union Pacific Railroad in 1987, to audit three years of freight bills for undercharges, managing nearly $15 billion of rate information. In 1990, Steward founded World Wide Technology, Inc., specializing in cloud capabilities, data center and virtualization, security, mobility and networking technologies along with voice, video and collaboration solutions. WWT provides advanced technology solutions from over 3,000 manufacturers to the commercial, government and telecom sectors.

In 2018, WWT made Fortune’s 100 Best Companies to Work For list for the seventh consecutive year. They also appeared on the 2018 Best Workplace in Technology list by Great Place to Work, Forbes’ Largest Private Companies list and placed eighth on Glassdoor’s 2018 Best Places to Work.

Steward is a member of the Horatio Alger Association of Distinguished Americans; the council board chair for the Greater St. Louis Area Council Boy Scouts of America, executive board member of Central Region and vice president and executive board member of National Boy Scouts of America. He is chairman emeritus of Variety the Children’s Charity of St. Louis and serves on the board of the Global Leadership Forum, St. Louis Regional Chamber, Civic Progress of St. Louis, and Biblical Business Training. In 2004, Steward published Doing Business by The Good Book, which matches scripture with guidelines for business practices.

Steward and his wife, Thelma, have two children.

Steward was interviewed by The HistoryMakers on December 18, 2006.

See how David Steward, Sr. is related to other HistoryMakers
Donate Now
Click Here To Explore The Archive Today!