Information about David A. Smith 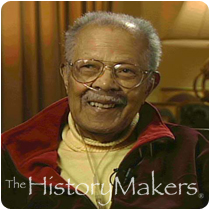 See how David A. Smith is related to other HistoryMakers
Donate Now

Real estate entrepreneur David A. Smith was born on August 29, 1915 in Clinton, Louisiana. Smith has the distinction of being one of the first African American real estate brokers in Denver, Colorado. His paternal grandfather, Walter Smith, was a contractor and built most of the homes, churches and schools in Clinton, Louisiana. As a child, Smith moved with his mother to New Orleans, Louisiana where he attended a private school, Gilbert Academy, before moving to Denver, Colorado and graduating in 1933 from Manual High School. Continuing his education, Smith attended Arkansas Agricultural, Mechanical and Normal College in Pine Bluff, Arkansas until 1935 before receiving his B.A. degree in economics from West Virginia State College in 1938. Completing his studies at the University of Denver in 1940, Smith received his M.A. degree in economics.

Smith began his professional career as an office assistant to Governor Neely of West Virginia. In the 1940s, he enlisted into the segregated United States Army. Here, he served as an officer in the 477th Bomber Group in Tuskegee, Alabama. He was one of the officers who fought against the discrimination that existed at Freeman Field and was arrested. After an honorable discharge, Smith returned to Denver and started several small entrepreneurial businesses including a liquor store and a real estate agency. He became one of the first African American real estate appraisers and brokers for the city of Denver. During his time, he became one of the most successful African American real estate brokers in Denver.

Smith retired in the late 1990s, and his daughter has continued to maintain his real estate practice. Smith has received several awards for being an outstanding businessman and is a member of several organizations including the Urban League and the NAACP. Smith passed away on January 24, 2010.

Smith was interviewed by The HistoryMakers on April 19, 2006.

See how David A. Smith is related to other HistoryMakers
Donate Now
Click Here To Explore The Archive Today!