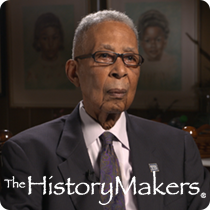 See how David Richards is related to other HistoryMakers

Military officer David Richards was born on March 19, 1929 in Sedalia, Missouri to Christina Diggs Richards and David Richards. He attended Lincoln School and C.C. Hubbard High School in Sedalia. Richards then studied at the College of Mortuary Science in St. Louis, Missouri, graduating in 1951. Years later, Richards received his B.A. degree in business administration from Park College in Parkville, Missouri in 1975. Three years later, he earned his M.A. degree in human resources from Pepperdine University.

Upon graduating from high school, Richards joined the United States Army in 1946. He was stationed at Camp Stoneman in California, and deployed overseas to the Pacific Theater. Richards became a member of the U.S. Army band, and rose to head of the reed section. After completing U.S. Army service in 1948, Richards worked briefly as an apprentice mortician, and returned to the Army in 1954. He completed airborne training at Fort Benning, Georgia and attended rigger school at Fort Lee, Virginia. He served ten years in the 612th Quartermaster Aerial Supply Company, and then transferred to the Artic Test Center in Fort Greenly, Alaska, where he tested airdrop equipment. Then, Richards was sent to the U.S. Army Natick Soldier Research, Development and Engineering Center in Massachusetts, where he helped develop expendable parachutes for the Vietnam War. In 1968, Richards became the Army’s first African American warrant officer, and remained the sole African American in that rank until his retirement in 1983. After his Army career, Richards worked at the Savannah-Chatham Metropolitan Police Department in staffing, and later as a crime prevention analyst. He continued teaching as an adjunct professor at Saint Leo University until 2000.

As the first African American warrant officer, Richards was inducted into the Parachute Rigger Warrant Officer’s Hall of Fame upon his retirement in 1983. Richards was also inducted into the Distinguished Order of Saint Martin within the Quartermaster Corps in the United States Army. He was a three time recipient of the Omega Man of the Year Award and the Superior Service Award. Georgia Legislative Black Caucus, Inc. also honored Richards with the Salute to Veterans Award.

Richards was a member of St. Philip A.M.E. Church in Savannah, Georgia. He also served as an advisor to the director of the West Board Street YMCA, as president for the Mental Health Association of the Coastal Empire, as vice chair of human services for Chatham County and as chairperson of the superintendent advisory council for the Chatham County Board of Education. Richards was a board member for the Frank Callen Boys and Girls Club, JHS of Savannah, the Meditation Center Board, the Martin Luther King Day Observance Committee and the Ralph Mark Gilbert Civil Rights Museum.

David Richards was interviewed by The HistoryMakers on February 9, 2017.

See how David Richards is related to other HistoryMakers
Click Here To Explore The Archive Today!