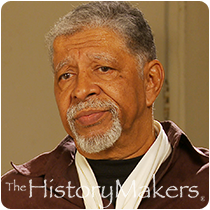 Photographer David Oggi Ogburn was born on December 14, 1942 in Brooklyn, New York to Archibald and Nannie Ogburn. He graduated from Andrew Jackson High School in Queens, New York in 1961. After taking courses at Saint Paul's College, Ogburn went on to receive his B.A. degree in sociology from Howard University in 1968, as well as his M.A. degree in urban studies in 1973.

Ogburn was hired in the 1960s as a social worker for the Society for the Prevention of Cruelty to Children. From 1969 until 1971, Ogburn worked as a merchandiser for General Motors. In 1970, he also worked as a freelance photographer, and founded Oggi's Kitchen Photomarket in 1971. Then, in 1975, Ogburn began serving as assistant to the Historian Chancellor James Williams, where he documented his work through photography and audiotape until 1987. Ogburn was also hired by local D.C. radio stations including Howard University’s WHUR-FM as a freelance photographer. He served for three years as a soundman for the D.C. Black Repertory Company and as the campaign photographer for President Jimmy Carter and former Washington, D.C. Mayor Walter Washington. For twenty-four years, Ogburn worked for the National Association of Black Owned Broadcasters. He has also photographed for record labels Sony, Arista, WEA, BMG, Polygram, Motown, and MCA.

Ogburn's photographs have been published in trade and consumer magazines ranging from Billboard to U.S. News and World Report. His work has been included in several photography collection books about African American images, history and culture. Ogburn’s photography has also been exhibited at the Smithsonian Museum of Natural History; the African American Museum in Philadelphia; the Brooklyn Museum of Art; as well as at various exhibits in Atlanta, Detroit, Montgomery, and Beijing, China. He received many honors and awards including Impact magazine’s Award of Excellence in 1997; the Exposure Group’s 2002 Photographer of the Year Award; and the Mid Atlantic Music Alliance’s Preservation of Music History honor in 2007. Ogburn has also been a member of the Exposure Group since 1998.

David Oggi Ogburn was interviewed by The HistoryMakers on October 21, 2013.

See how David "Oggi" Ogburn is related to other HistoryMakers
Donate Now
Click Here To Explore The Archive Today!