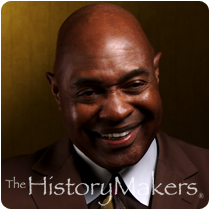 See how David Lattin is related to other HistoryMakers
Donate Now

Professional athlete and entrepreneur, David Lattin was born on December 23, 1943 in Houston Texas. His mother, Elsie Lattin, was widowed when Lattin’s father died in 1949. Lattin attended elementary and secondary schools in Houston before graduating from Evan E. Worthing Senior High School in 1963. Lattin was named All-State and All-American both his junior and senior years and was the first Texas player to be named to a High School All-American team.

Lattin left Tennessee State in 1964 citing the lack of basketball competition. He returned to Houston and played the AAAU before receiving a full scholarship to attend Texas Western College in 1965 where he played with the Miners, a Division 1 team in the NCAA. Under the leadership of Coach Don Haskins, the Miners won the 1966 Division 1 NCAA National Championship with five black starting players. Lattin was named All-American during the 1966 and 1967 seasons.

In 1967, Lattin left Texas Western College after he was drafted as the number one pick by the NBA’s San Francisco Warriors. He went on to play with the Phoenix Suns, the Pittsburgh Condors, and the Memphis Tams, ending his professional career with the Harlem Globe Trotters from 1973 to 1976. Returning to school, Lattin earned his B.S. degree in business administration and started several successful business ventures including Your Maison Housing.

Lattin was inducted into the Texas Black Sports Hall of Fame and the Naismith Memorial Basketball Hall of Fame in 2007. That year, he also wrote Slam Dunk to Glory.

Lattin has a son Clifton, a daughter Leslie, and several grandchildren.

David Lattin was interviewed by The HistoryMakers on May 11, 2010.

See how David Lattin is related to other HistoryMakers
Donate Now
Click Here To Explore The Archive Today!