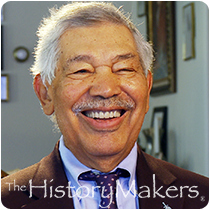 See how David James is related to other HistoryMakers
Donate Now

From 1944 to 1945, James flew combat missions with the 332nd Fighter Group over Germany as well as other countries in Eastern Europe during World War II. In 1946, James completed his tour of duty with the Army Air Force and re-enrolled at Loyola University. Later, in 1949, James graduated from Loyola University with his B.A. degree. James was hired by business machine manufacturer Burroughs Corporation in 1950 and became the company’s first African American salesman. In 1956, James found a job with the University of Chicago before he was appointed as a deputy director with the State of Illinois in 1961. While there, part of his responsibilities involved working on the “War on Poverty.” James then graduated from DePaul University College of Law with his J.D. degree in 1963. James was hired by the American Bar Association (ABA) in 1967 and became the first African American attorney to be hired by that organization. He worked at the ABA until 1984.

In 1967, James became the first African American homeowner in Winnetka, Illinois. Soon after moving to Winnetka, James became involved in groups that were forming on the North Shore to promote better race relations and open housing. In 1967, James and his wife, Mary, established Together We Influence Growth (TWIG) Day Camp that brings together children from South Side neighborhoods and children from the North Shore. In 1972, James helped found the North Shore Interfaith Housing Council (now the Interfaith Housing Center of the Northern Suburbs), which is organized to fight housing discrimination. In the late 1980s, James was appointed as an administrative law judge for the U.S. Department of Labor. In 1990, James went into private practice as an attorney and remained there until 2000. In 2009, James, along with more than one hundred other Tuskegee Airmen, attended the Inauguration Ceremony of President Barack Obama.

See how David James is related to other HistoryMakers
Donate Now
Click Here To Explore The Archive Today!