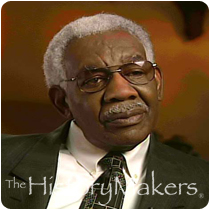 See how David Holliman is related to other HistoryMakers
Donate Now

Entrepreneur David Holliman was born on September 13, 1929 in Denver, Colorado.
Holliman became one of the first African Americans to gain long term employment with Continental Airlines where he helped to organize an African American maintenance workers organization. During his childhood, his father, Ernest William Holliman, was a Pullman porter and his mother, Adele Banks, died when he was two years old. His father moved the family from Pueblo, Colorado to Denver in the early 1940s where he attended Denver Public Schools receiving his diploma from East High School in 1948. That same year, he enlisted into the United States Coast Guard where he spent four years. In 1952, Holliman was discharged from active duty and spent another three years in the Army Reserves.

Holliman began his professional career as a small business owner. He owned a small janitorial business that offered cleaning services to office buildings in Denver. In 1966, he joined Continental Airlines in the maintenance department becoming one of the first African Americans to gain long term employment. There, he fought the biased policies that existed towards the African American workers and won his battle with a lawyer. Holliman later served as president of United Maintenance Incorporated and vice president of Queen City Services, Incorporated. In 1986, he retired from Continental Airlines.

Holliman has received mayoral appointments to the Denver City and County Board of Appeals and to the Mayor’s Black Advisory Committee. He also served as the president of the Barrett Elementary School’s Parent and Teacher Association. In 1990, he completed his studies at Regis College in Denver, Colorado where he received his B.S. degree in administration, business, and economics. Holliman has received the prestigious honor of being the Imperial Potentate of the Ancient Egyptian Arabic Order, Nobles of the Mystic Shrine and Jurisdiction.

Holliman resided in Denver with his wife and family.

See how David Holliman is related to other HistoryMakers
Donate Now
Click Here To Explore The Archive Today!