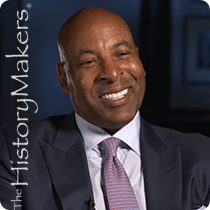 See how David Grain is related to other HistoryMakers

Investment executive David Grain was born on May 31, 1962 in Brooklyn, New York to Dora Grain and Walter Grain. Grain attended Vineyard Regional High School in Oak Bluffs, Massachusetts and graduated from the College of the Holy Cross in Worchester, Massachusetts in 1984 and earned his M.B.A. degree from Dartmouth College, Tuck School of Business in Hanover, New Hampshire in 1989.

Grain began his professional career in 1989 at Drexel Burnham Lambert, and, after a year at Drexel Burnham Lambert, he accepted a position with Morgan Stanley, where he was promoted to principal after only two years with the company. Grain’s work focused on telecommunications, media, and technology companies. In 2000, he joined AT&T Broadband Corporation as the senior vice president for the New England region. Only two years later, Grain became a director at Newcastle Investment Corporation, as well as president at Pinnacle Holdings, Inc. During his presidency at Pinnacle Holdings, Grain led the company out of bankruptcy and grew the company’s portfolio from approximately 2,000 communication sites to over 11,000. After Crown Caste International acquired Pinnacle Holdings in 2006, Grain left the company and founded Grain Communications Group, Inc. The following year, he founded Grain Management, LLC, which invested in the wireless communications sector.

Grain was named by the Boston Business Journal as one of Boston’s “Top 40 leaders under 40” and was awarded the Ten Outstanding Young Leaders Award by the Boston Jaycees. His company, Grain Management, LLC, was also named as Black Enterprise’s Financial Services Company of the Year in 2005.

In addition to his own businesses, Grain has served in leadership roles for many other organizations as well. In 2009, he was appointed to the Florida State Board of Administration’s Investment Advisory Council and, two years later, was appointed by President Barack Obama to the National Infrastructure Advisory Council of the U.S. Department of Homeland Security. Grain was also selected by Secretary of Defense Donald Rumsfeld to participate in the U.S. Joint Civilian Orientation Conference. He served on the board of trustees for Emerson College and the College of the Holy Cross. Grain was the founder of the Grain Fellows Program, which provides students from low-income families with funding for SAT preparation classes, college application fees, and financial aid negotiation.

David Grain was interviewed by The HistoryMakers on August 17, 2017.

See how David Grain is related to other HistoryMakers