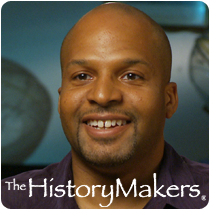 Favorite Color:
Blue, Red
Favorite Time of Year:
Summer
Favorite Vacation Spot:
Beaches
Favorite Quote:
If We Knew What We Are Doing, We Wouldn't Call It Research, Would We?

Favorite Color:
Blue, Red
Favorite Time of Year:
Summer
Favorite Vacation Spot:
Beaches
Favorite Quote:
If We Knew What We Are Doing, We Wouldn't Call It Research, Would We?

See how David Garrison is related to other HistoryMakers
Donate Now

Physicist David Garrison was born on October 27, 1975 in Chicago, Illinois to parents Christine and Millard Garrison, Jr. He has two older siblings, Cassandra Guichard and Michael Garrison. He went to grade school in O’Fallon, Missouri, attending Mount Vernon Elementary School, Fort Zumwalt North Middle School, and Fort Zumwalt North High School. While in high school, he was a jazz soloist in the jazz band. Garrison finished secondary school in 1993, after which he began studying at the Massachusetts Institute of Technology and played on the varsity football team for three years. He received his B.S. degree in physics from there in 1997. That same year he began a doctoral program in physics at Pennsylvania State University. He received his Ph.D. in physics from Pennsylvania State University in 2002.

During graduate school in 1999, he started Fast Financial Analysis with his future wife Rispba McCray-Garrison. The company provides software programs useful in analyzing money metrics. In 2002, he began working for the University of Houston-Clear Lake (UHCL) as a visiting assistant professor. A year later, he became a regular assistant professor and began reorganizing the physical sciences program into an actual physics department. The department now has a B.A. degree in physics, a M.S. degree in physics, a collaborative Ph.D. degree in physics with the University of Houston, and a P.S.M. degree in physics with a sub-plan in technical management. With these degrees programs, Garrison has been able to attract students better qualified to help with his research in numerical relativity, cosmology, computational physics, and plasma physics. In addition to research at the University of Houston-Clear Lake, he has also worked in collaboration on many projects with NASA’s Johnson Space Center, including a project for the development of a plasma rocket engine. In 2003, Garrison became the faculty chair of the physics program and began the UHCL Physics and Space Science Guest Lecture Series. He has also served terms on university bodies such as the Planning and Budget Committee, the Faculty Senate, University Council, and the Academic Council.

In 2002, Garrison married Rispba McCray-Garrison on December 28. In 2012, he became an advisory board member for the Space Center Houston and published What Every Successful Physics Graduate Student Should Know.
David Garrison was interviewed by The HistoryMakers on August 15, 2012.

See how David Garrison is related to other HistoryMakers
Donate Now
Click Here To Explore The Archive Today!