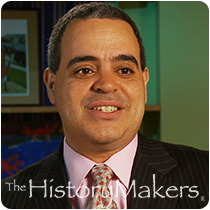 In 1994, Chaumette was hired as an associate at the law firm of Mayor, Day, Caldwell & Keeton. From 1998 to 2002, he worked for the Houston, Texas law firm of Porter & Hedges LLP. From 2002 until 2011, Chaumette served as a partner at the law firms of Shook Hardy & Bacon, Baker & McKenzie, and De la Rosa & Chaumette. In December of 2011, he founded the Sugar Land based law firm, Chaumette PLLC, which specializes in business litigation. In 2013, Chaumette was named the first African American president of the Houston Bar Association (HBA).

Chaumette was president of the Houston Young Lawyers Association from 2003 to 2004, and has served on the boards of directors and executive committees for the Houston Bar Association and Neighborhood Centers, Inc. He has also been the president or chair of several other organizations, including Leadership Houston, the Houston Lawyers Foundation, and First Colony Little League. His professional memberships include the National Bar Association, the Houston Lawyer Association, the College of the State Bar of Texas and the Pro Bono College of the State Bar of Texas. In addition, Chaumette is a fellow of the American Law Institute and the Litigation Counsel of America, and has written numerous articles that have been published in magazines and scholarly journals.

In 2004, Chaumette was named as one of the Five Outstanding Young Houstonians by the Houston Junior Chamber of Commerce and one of the Five Outstanding Young Texans by the Texas Junior Chamber of Commerce. He was named to the Visitors Committee of the South Texas College of Law in Houston in 2005, and was named one of the 500 New Stars by Lawdragon.com in 2006. In 2009, Chaumette was recognized as an Extraordinary Minority in Texas Law by Texas Lawyer Magazine. In 2011, he received the Standing Ovation award from the Texas Bar for his service to TexasBarCLE. Chaumette has also been named “Texas Rising Star” and a "Super Lawyer" by Law & Politics Magazine for several consecutive years.

Chaumette lives in Sugar Land, and has two sons, Raphael and Alexandre.

David Chaumette was interviewed by The HistoryMakers on March 3, 2014.