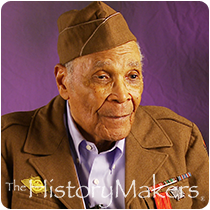 See how David Brown is related to other HistoryMakers

Enlisted Soldier David W. Brown was born on August 26, 1920 in Memphis, Tennessee. In 1943, four years after completing high school, and three days after he and his wife were married, Brown was drafted into the United States Army.

In 1944, Brown was deployed during World War II with the 490th Port Battalion, 226 Port Company European Theater, where he served as a technician 4th Grade. On D-Day, June 6, 1944, Brown landed on the shores of Utah Beach alongside 23,000 other men as allied forces stormed the beaches at Normandy. The following year, while still serving in Europe, he would travel to England, France and Belgium. In December of 1945, Brown received an Honorable Discharge from the United States Army. Following the end of the War, he returned to the United States and was discharged from the military in a ceremony at Fort Knox, Kentucky. Brown then traveled to St. Louis, Missouri, where he attended Maplewood Refrigeration, a vocational school. After completing training there in 1948, Brown worked as a refrigeration engineer. He also attended the Carrier Corporation, another vocational institute in Syracuse, New York, where he received further schooling in AC engineering. Brown went on to work as a refrigeration and air conditioning engineer at Beaumont Medical and System Air. He then established his own firm, Brown Industrial Corporation.

Brown was the recipient of many awards and honors. In 2004, he was the featured veteran in Studs Terkel’s production The Good War, showcased in Skokie, Illinois. Then, in 2009, after contributing to the History Channel’s program A Distant Shore: African Americans of D-Day, Brown was awarded an Emmy plaque from the National Academy of Television Arts and Sciences. In 2010, during a ceremony in Northbrook, Illinois, he was awarded the Chevalier of the Legion of Honor medal, the highest decoration bestowed on those who have achieved remarkable deeds for France.

See how David Brown is related to other HistoryMakers
Click Here To Explore The Archive Today!