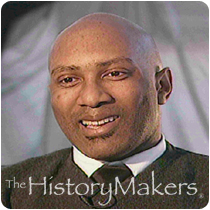 See how David Bodrick is related to other HistoryMakers
Donate Now

Celebrity photographer David Bodrick was born on July 31, 1963 in Brooklyn, New York. His mother was a teacher, his father a contractor. Bodrick was educated in the New York City public school system. In 1980, during his sophomore year at high school, he became a teenage father. After earning his diploma from James Madison High School in 1982, he began working full time as a messenger on Wall Street.

Over the next several years, Bodrick held several temporary jobs on Wall Street until he landed a full time position at Nippon Credit Banking. While working at Nippon, Bodrick earned his B.A. degree in film in 1988 from The School of Visual Arts in New York. In 1992, he began producing a cable show highlighting fashion and music trends in New York City. He also worked as a production assistant for MTV.

In 1995, Bodrick and his younger brother, Jonathan, started DMBJ Productions, a company which photographs and videotapes celebrities. His agency, known for celebrity footage, has often been the first to publish photos of famous couples.

Bodrick lives in New York City. His son, David III, is a producer at DMBJ Productions.


See how David Bodrick is related to other HistoryMakers
Donate Now
Click Here To Explore The Archive Today!