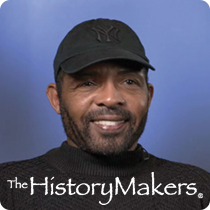 See how Daryl Waters is related to other HistoryMakers
Donate Now

Music composer and arranger Daryl Waters was born in Cleveland, Ohio. From the age of eight years old, Waters studied music at the Cleveland Music School Settlement. While attending Shaw High School in East Cleveland, he played piano and served as a conductor for Karamu Theater and The Singing Angels, as well as conducting at a summer music theatre program and performing with his own band. Upon graduation, Waters enrolled at Livingstone College in Salisbury, North Carolina, where he obtained his B.A. degree in music with a specialization in piano performance in 1978.

Waters returned to Cleveland after graduation, playing various jobs around town, before moving to New York in 1981, where he began working as a nightclub pianist, arranger and conductor. In 1983, Waters became the music director for the European tour of Ain’t Misbehavin’, the acclaimed musical revue of the Harlem Renaissance and tribute to Fats Waller. In 1985, Waters landed his first job on Broadway as the associate conductor of the Broadway musical, Leader of the Pack, directed by Michael Peters who choreographed Michael Jackson’s “Thriller” and “Beat It” music videos. In 1992, Waters was the associate conductor for George C. Wolfe’s Jelly’s Last Jam, joining Wolfe again in 1996 as a co-composer of Bring in ‘Da Noise, Bring in ‘Da Funk, which garnered him his first Tony and Grammy nominations. In 1997, Waters supervised and orchestrated Street Corner Symphony, a revue of 1960s and 1970s soul music.

Waters worked Off-Broadway as the music director for George C. Wolfe’s The Colored Museum (1986), the composer for In Real Life (2001), orchestrator for Kirsten Childs’ Miracle Brothers (2005), music director of The Seven (2006) (a hip-hop adaptation of Aeschylus’ Seven Against Thebes), composer for Blue Door (2006), supervisor/arranger for the highly-acclaimed musical celebration A Civil War Christmas (2008) by Pulitzer winner Paula Vogel, and orchestrator for Childs’ Bella (2017).

In 2010, Waters earned rave reviews for his orchestration of Memphis: A New Musical, receiving both Tony and Drama Desk Awards. In 2013, he was the conductor for After Midnight, under the music direction of Wynton Marsalis, with various stars including Fantasia, Toni Braxton and Kenneth Edmonds, and Patti LaBelle. He arranged, orchestrated and supervised music for Holler If Ya Hear Me (2014), Shuffle Along (2016) with director George C. Wolfe (for which he also wrote new material), and The Cher Show (2018).

In addition to his theatrical accomplishments, Waters became Eartha Kitt's music director in 1986, performing concerts with her on six continents over twenty-two years. He also conducted and arranged for many other stars, including Leslie Uggams, Sammy Davis Jr., Gregory Hines, Cab Calloway, Nell Carter, Patti Austin and Jennifer Holliday.

Waters is a member of the Dramatists Guild of America and the American Federation of Musicians.

Daryl Waters was interviewed by The HistoryMakers on December 12, 2016.

See how Daryl Waters is related to other HistoryMakers
Donate Now
Click Here To Explore The Archive Today!