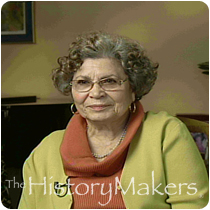 Favorite Color:
Yellow
Favorite Food:
Broccoli
Favorite Time of Year:
Fall
Favorite Vacation Spot:
North Carolina, South Carolina
Favorite Quote:
Age Is What You've Done With What You Had And What You Have Left To Work With.

Favorite Color:
Yellow
Favorite Food:
Broccoli
Favorite Time of Year:
Fall
Favorite Vacation Spot:
North Carolina, South Carolina
Favorite Quote:
Age Is What You've Done With What You Had And What You Have Left To Work With.

See how Darwin McBeth Walton is related to other HistoryMakers

Author Darwin McBeth Walton was born Jane Darwin McBeth on September 16, 1926, in Charlotte, North Carolina, to John and Mary McBeth. Walton graduated from West Charlotte High School in 1944. After attending Johnson C. Smith University and Howard University, Walton received her B.A. degree in music from the Chicago Conservatory of Music in 1950. She later returned to school and received her M.E. degree in teaching from National-Louis University (NLU) in 1973. Since 1978, Walton has designed and facilitated five courses in teacher education for NLU and remains in the education arena as student teacher supervisor there.

Walton brings music and twenty years of public school teaching to her reading and writing audience. As a participant in the “Author in the Schools” Program and the “Open Book” After School Program in Chicago’s inner-city schools, she is a frequent visitor to classrooms and libraries throughout the Chicago Metropolitan area. Walton published her first book, What Color Are You?, in 1973. It was published by Johnson Publishing Company and was one of the first books about America’s diversity to be used in public schools. It was named a landmark book by the Chicago Historical Society. Her next book, Overcoming Challenges, is the story of astronaut Major General Charles F. Bolden, one of the first four black astronauts in the U.S., and the challenges he faced in his quest for education during the 1960s. Her highly acclaimed contemporary middle-grade novel, Dance Kayla, tells the story of a young girl who was uprooted from her beloved farm life in South Carolina to begin anew with a family in Chicago. It was chosen one of the best books of 1990 by the Banks Street College of Education Selection Committee. Her other books include Kwanzaa: A World of Holidays; Nana’s Kitchen; two books on the Underground Railroad: They Walked With Courage and Jetty’s Journey; and two early readers: Part of My Family and Families Are Special.

In 1998, Walton was elected Outstanding Woman Leader in the field of Racial Justice in DuPage County. She was honored again in 2003 with the Distinguished Alumni Humanitarian Award from National-Louis University.

See how Darwin McBeth Walton is related to other HistoryMakers
Click Here To Explore The Archive Today!