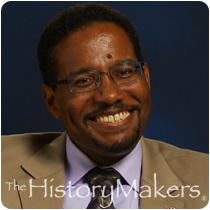 See how Darryll Pines is related to other HistoryMakers

Pines worked for the Chevron Corporation and Space Tethers, Inc. before joining Lawrence Livermore National Laboratory (LLNL)’s Advance Technology Program. At LLNL, he helped design the sensor technology of Clementine-1 spacecraft. In 1995, Pines joined the faculty of the University of Maryland (UMD) as an assistant professor. He became the director of UMD’s Sloan Scholars Program in 1996 and the director of the GEM Program in 1999. Pines has also served as chair of the Engineering Council, director of the NASA CUIP Program and director of the SAMPEX flight experiment. He took a leave of absence from 2003 to 2006 to serve as the program manager for the Tactical Technology Office and Defense Sciences Office of DARPA (Defense Advanced Research Projects Agency). In 2006, Pines became chair of UMD’s Department of Aerospace Engineering, where under his leadership, the department was ranked eighth overall among United States universities. Three years later, he was named dean of the A. James Clark School of Engineering and the Nariman Farvardin Professor of Engineering. Pines’ research focuses on structural dynamics, smart sensors, biologically inspired structures as well as the guidance and control of aerospace vehicles.

Pines was named a fellow of the Institute of Physics, the American Society of Mechanical Engineers and the American Institute of Aeronautics and Astronautics. He has received the NACME Alumni Circle Award and a National Science Foundation CAREER Award.

Darryl Pines was interviewed by The HistoryMakers on July 13, 2012.

See how Darryll Pines is related to other HistoryMakers
Click Here To Explore The Archive Today!