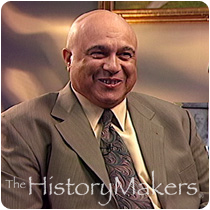 See how Darryl Hill is related to other HistoryMakers
Donate Now

Football great Darryl Andre Hill was born on October 21, 1943 in Washington, D.C. He is the eldest child of Palestine and Kermit Hill. Hill attended Nevell Thomas and Mott Elementary Schools in Washington, D.C. before attending Holy Name, a private Catholic school in Washington. Hill broke the color barrier on the football field when he enrolled at Gonzaga College High School and graduated in 1960.

From 1960 to 1961, Hill attended Xavier University in Cincinnati, Ohio on a football scholarship. After a year, he transferred to the plebe team of the U.S. Naval Academy in Annapolis, Maryland where he broke the color barrier once again as the first African American football player on that team. A starting half back with Navy, Hill caught passes from the now famous quarterback, Roger Staubach. In 1962, Hill left the Naval Academy for the University of Maryland in College Park when he became the first African American to play football in the Atlantic Coast Conference. In 1965, Hill received his B.S. degree in economics from the University of Maryland.

After graduation from Maryland, Hill opened a restaurant in Washington, D.C., called W.H. Bone, which was one of the city’s first upscale soul food restaurants. Hill left the restaurant business in 1992 and moved to the West Coast where he ran several successful energy related companies. In 2001, Hill entered into several forestry and packaging ventures in the former Soviet Union. In 2003, Hill returned to his alma mater as the director of major gifts at the University of Maryland.

Hill is the father of three, Tami, Patrick and Maia. He currently resides in Columbia, Maryland and is active in 100 Black Men and The Terrapin Club.

See how Darryl Hill is related to other HistoryMakers
Donate Now
Click Here To Explore The Archive Today!