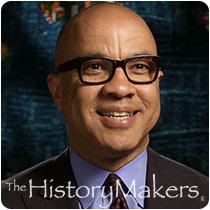 See how Darren Walker is related to other HistoryMakers

Walker was hired at the international law firm of Cleary, Gottlieb, Steen & Hamilton in 1986. In 1988, he joined the Union Bank of Switzerland (UBS), where he spent seven years in the capital markets division. He left UBS in 1995 and worked for a year as a full-time volunteer at The Children’s Storefront, an elementary school serving low-income families in Harlem. Walker then entered the nonprofit sector as chief operating officer for the Abyssinian Development Corporation, a community development organization in Harlem, where he guided efforts to develop housing for low and moderate-income families. In this capacity, he oversaw two of Harlem's largest privately financed commercial projects as well as the development of the first public school built in New York City by a community organization.

Walker was hired by the Rockefeller Foundation in 2002 as director of its domestic urban program. In 2006, he was promoted to vice president for foundation initiatives, where he led both domestic and global programs. Then, in 2010, Walker was named the Ford Foundation’s vice president for Education, Creativity and Free Expression, where he shaped more than $140 million in annual grant-making around the world. Walker was appointed the tenth president of the Ford Foundation in September of 2013, becoming the second African American to head the foundation.

He has served on the boards of the Arcus Foundation, Rockefeller Philanthropy Advisors, the National Low Income Housing Coalition, Friends of the High Line, the New York City Ballet, and the Foundation for Art and Preservation in Embassies. He also co-chaired the New York Public Library Council. In addition, Walker has taught housing, law and urban development at the New York University School of Law and Robert F. Wagner Graduate School of Public Service, and is a fellow of the Institute for Urban Design. He is a member of the Council on Foreign Relations, and has received the University of Texas Distinguished Alumni Award as well as the Honorary Order of the Coif by its law school. He is the recipient of honorary degrees from Bard College and Miami Dade College.

Darren Walker was interviewed by The HistoryMakers on August 26, 2014.

See how Darren Walker is related to other HistoryMakers
Click Here To Explore The Archive Today!