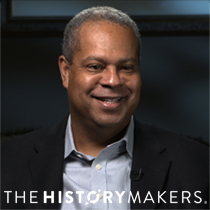 See how Darrell Jackson is related to other HistoryMakers
Donate Now

Business executive Darrell Jackson was born on April 6, 1958 in Chicago, Illinois to Carolyn and Erwin Jackson. Jackson graduated from Mendel Catholic High School in 1976, and went on to earn his B.A. degree in mass communication and media studies from Saint Xavier University in 1981. During college, Jackson worked in the mail room of South Shore Bank, which sparked his interest in banking. He later earned his M.B.A. degree from Northwestern University’s Kellogg School of Management in 2000.

Jackson began his career at BMO Harris Bank in Chicago in 1981, where he completed their commercial banking training program. Jackson went on to become vice president of Harris Bank. In 1995, Jackson became the vice president of personal financial services for Illinois for Northern Trust Corporation. He was promoted to chief executive officer of the Northern Trust Company's Illinois West Suburban Region, and later served as senior vice president and head of the private banking division. In 2010, he was promoted to executive vice president and president of Northern Trust’s Wealth Management business in Illinois. Jackson worked at Northern Trust until 2014, when he was named president and chief executive officer of Seaway Bank and Trust Company, the third largest African American owned commercial bank in the country. During his fifteen month tenure there, Jackson restructured the bank’s balance sheets, increased its liquidity position, and improved its tier one leverage ratio to an acceptable regulatory level. In 2015, Jackson became the first African American chair of the Illinois Bankers Association.

He was on the board of directors of Seaway Bank and Trust Company in addition to being president and CEO, The Delaware Place Bank, The Morton Arboretum, the Illinois Bankers Association, the 100 Club of Chicago and the Kellogg Alumni Council of Northwestern University. Jackson became the first African American chairman of the board for the Illinois Bankers Association, The Morton Arboretum and the 100 Club of Chicago. He also served on the CEO advisory board of Visage International, and served on the boards of The Chicago Child Care Society, and the Children’s Inner City Educational Fund. Jackson was a member of the Illinois BancService Corp Board and Strategic Planning Committee. Jackson was voted one of the forty leaders of color by Chicago United in 2003; and was given the 2004 Martin Luther King Jr. Legacy Award by the Boys and Girls Club of Chicago. In 2014, he received the Father John Phelps Humanitarian of the Year Award from Life Directions. Jackson is also a member of Sigma Pi Phi Fraternity.

Jackson and his wife, Valencia Ray, have two children, Lindsay and Tyler.

Darrell Jackson was interviewed by The HistoryMakers on April 6, 2018.

See how Darrell Jackson is related to other HistoryMakers
Donate Now